BERLIN, Germany, May 21, 2017: The European member federations of FIBA gathered in Berlin on Saturday for their annual FIBA Europe General Assembly, an important event in the FIBA Europe calendar. 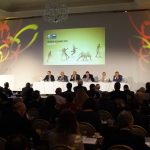 For the first time, the assembly included a delegate from the Great Britain Federation, which is the body that has replaced the Associations of England, Scotland and Wales.

The President of the German Basketball Federation Ingo Weiss welcomed the delegates. In his speech, he stressed the importance of hosting the basketball family in the German capital and paid special tribute to former FIBA Treasurer and Central Board member Manfred Ströher.

Nobody knows basketball and its history better than Manfred, and we are thankful for all his contributions to basketball in Germany and world-wide.”

In addressing the assembly FIBA President Horacio Muratore spoke about the recent positive changes in the basketball landscape. He said:

“In 2014, we introduced changes in the governance of FIBA and have presented new goals. The recent Mid-Term Congress in Hong Kong has proven that we are on the right track to reach all those goals. We are closer to basketball in the different countries. One FIBA today is more relevant than ever.

The contribution of each FIBA zone and each national federation is of the utmost importance for the development of basketball world-wide, be it grassroots, 3×3 or the new FIBA Calendar and Competition System from 2017 onwards. FIBA is trusting its federations and we will continue to support them in this new era.”

In his speech FIBA Europe President Turgay Demirel reminded the delegates of another year of European basketball successes.

He said: “2016 proved to be another successful year for European basketball. The success of European national teams in world tournaments showed that they are among the strongest, Serbia and Spain being a prime example after winning medals in both the women’s and men’s Olympic basketball tournament.

“The Qualifiers windows for FIBA EuroBasket Women 2017 showed remarkable results, with all games embraced by the federations and fans and the women’s game experiencing extended exposure on TV.

The response proves that women’s basketball is on the right track, and I am sure that we will see another prove of this at the Final Round in Czech Republic.

“FIBA EuroBasket 2017 will see the continuation of the four-country hosting model, which was established in 2015. Hosts Finland, Israel, Romania and Turkey are passionate about basketball and their efforts promise another successful event, which will see high-level basketball and which we are proud to be a part of.”

“Our efforts and investments into grassroots basketball in the past years are showing results which we can be very proud and happy with. This summer, for the first time, all our 50 member federations will be participating across the 16 European Youth Championships.”

FIBA Executive Director Europe, Kamil Novak, the different commissions of FIBA Europe as well as Walter Pfaller, the President of the European zone of the International Wheelchair Basketball Federation (IWBF), all presented their annual reports to the delegates.

The session concluded with the assembly voting Cyprus as the host country for the 2018 General Assembly.

On Friday, the Board of FIBA Europe, which also convened in Berlin, approved Chemnitz, Germany as the destination for next year’s FIBA U20 European Championship.

The early designation affects the system of relegation and promotion in the respective Division A events for the 2017 summer. If one of the 2018 host countries finish among the bottom three in their respective competition this summer, then only two teams will get relegated from that event and only two teams will be promoted from Division B.

The Board also approved a proposal to make the early designation of European Youth Championships a standard for all future organizers, with bids and awarding of events up to two years in advance, to help those organizers with mid and long term planning.

A further decision was made on the hosts of the 2018 FIBA European Championship for Small Countries. The men’s event will be organized in San Marino and the women’s one will be held in Ireland. —- FIBAEUROPE