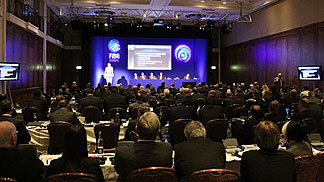 New Port – Wales, May 18, 2013: Europeans must work together towards a common goal which is the development of basketball was the message sent ou t by the 2013 FIBA Europe General Assembly which was concluded in Newport, Wales, on Saturday.

With 46 of the 51 member Federations present, Justin Ogleby, Chairman of Basketball Wales took to the floor first to welcome the delegates.

He was followed by guest speaker FIBA President Yvan Mainini, who spoke about the need of a strong, united Europe with all its competitions.

“Our sport is quite clearly in danger. Together we have to lead Europe towards progress and development,” said Mainini.

“Our product is the National Teams [competitions] and we must focus on them; by no means would we want to push the clubs aside but a strong new national team competition system will benefit all, including the clubs.”

He reiterated FIBA’s goal to have 3×3 introduced as a new Olympic discipline by 2016 or 2020 at the latest. Speaking about women’s basketball he added that the basketball community must identify ways to help it grow.

Mainini also stressed that FIBA has taken notice of Europe’s stance towards the calendar and the proposal about the windows. “We will do our best to accommodate them as much as possible,” he said.

FIBA Europe President Olafur Rafnsson spoke in similar fashion in his remarks, pointing out that Europe should be the leading force in the world towards uniting basketball, not dividing it.

He reminded the delegates of the need to respect the current bye-laws structure as it was approved unanimously. He said that several difficult decisions have been made but they were all democratic, including the rejection of a request by a number of member Federations for an extraordinary General Assembly and elections.

“This process against our own basketball family was not celebrated. We would have preferred that the resources used by all parties in that dispute were used instead to invest back on basketball,” said Rafnsson.

“Our big countries are the drivers to our success; this why I initiated a fist forum with their participation to discuss the issues that matter to them the most.

“We understand the frustration of some big countries to not be represented at the Board [of FIBA Europe]; but we expect them to work towards a compromise for the General Assembly next year which is also election year.

Completing the comprehensive review of the bye-laws and respective governance reforms in close cooperation with the member Federations.

A development programme, to give support and contributions to our National Federations – both for services and finances.

Simplifying the complicated club competitions landscape and increasing cooperation and solutions with ULEB and Euroleague.

Development of the models of the National Team competitions – both EuroBaskets and Youth competitions – but also analyse all views on developing new competitions where needs of the member Federations are calling for this. This project also includes FIBA Europe’s 3×3 programme.

Developing a Communications Plan, including improvement of the role and respect of FIBA Europe towards the global stakeholders, and a proposal of a new Commission in the future.

Rafnsson’s remarks were followed by the reports of the FIBA Europe Secretary General Kamil Novak and the various FIBA Europe Commissions.

In his presentation, Novak said that his main goal in his first six months in the office is to set a trategy for the coming years and work towards delivering a successful EuroBasket Women and EuroBasket 2013.

He informed the delegates that FIBA Europe are in negotiations with Euroleague and ULEB with regards to a new European cups landscape that would involve only two competitions. He also stated that the bidding process for the two 2017 EuroBaskets is expected to start this year.