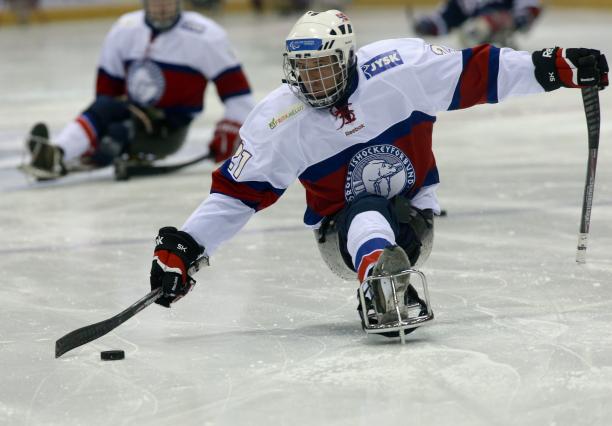 By guaranteeing a top-four finish in Goyang, all four teams have now qualified for the Sochi 2014 Paralympic Winter Games.

Following the conclusion of group play on Tuesday (16 April), the USA (3-0) are undefeated and the top seed in Group A, and the Czech Republic (2-1) are second. Canada (3-0) went undefeated to win Group B, and Russia (2-1) finished second with just one loss.

On the final day of play, Russia slipped past Italy 1-0, with Dmitry Lisov scoring the lone goal at the start of the third period off a pass from Ivan Kuznetsov.

Italy (2-1) actually outshot Russia 18-9, as Italian forward Florian Planker had five shots on the net to his name, but Lisov’s attempt was the only successful one for either side. Mikhail Ivanov played all 45 minutes in the net for the Russians, saving the puck 17 times.

Now, Russia are just one win away from medalling at their first World Championships A-Pool after taking gold in their first B-Pool event in Novi Sad, Serbia, last November.

“We won today and we are one step closer to winning gold and winning this tournament, and that’s our goal,” Lisov said.

Canada flexed their strength against host nation Korea (0-3) with a 5-0 victory that was broadcast on KBS throughout the country. The Canadians outshot the home team 23-10, and Brad Bowden had six of those shots, with two going into the net.

Marc Dorion scored on an assist from Graeme Murray, Adam Dixon found the net off a pass from Billy Bridges and Anthony Gale recorded to the final goal for Canada. Min Su Han, Korean captain, anchored his squad’s effort on defense, but was unable to get enough help up top, leaving Korea winless thus far in Goyang. Now, Canada will try to better their bronze-medal finish from last year’s event.

“I don’t care who we play to get there, I just want to get to that gold-medal final this year,” Canadian captain Greg Westlake said.

The USA won Group A outright with a dominant 3-0 performance against the Czech Republic, reversing the outcome from when the two met at last year’s Championships.

Declan Farmer, Josh Sweeney and Kevin McKee all scored for the USA, with star goaltender Steve Cash recording yet another shutout with the help of back-up netminder Jen Yung Lee.

In three games, the Americans have now outscored their opponents 17-0 in Goyang. A moment of silence was held before the matchup to honour those affected by the tragedy in Boston.

Norway (1-2), meanwhile, picked up their first win of the Championships with a nail-biting 2-1 victory over Sweden (0-3).

Veteran Eskil Hagen scored just 6:12 into the contest and Rolf Pedersen smacked another one into the goal seven minutes later to put the Norwegians – who have appeared at every Winter Paralympic Games – up 2-0 after the first period.

Rasmus Lundgren scored late in the third on a pass from Aron Anderson, and Sweden’s offense fought until the very last second of the game, but Norway were able to hold onto their lead just long enough to close it out.

Pedersen, Lundgren and Anderson all had three shots on goal for their respective teams, while Norwegian captain Stig Tore Svee anchored the winning team’s defense to keep their hopes of directly qualifying for Sochi 2014 alive.

“The next game is the most important in Norwegian sledge hockey history,” Tore Svee said. “We need to step it up even more.”

Norway will now play Korea in the consolation bracket, while Italy will face Sweden. One of the four will earn the final Sochi 2014 direct qualification spot available at these Championships. —- IPC