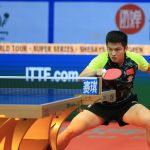 MA Long, who is the world number one and holds every major table tennis title including the Rio 2016 title last month was out to win his 23rd ITTF World Tour title, and everyone was confident that was going to happen based on his unbeatable form that he showed the past 18 months.

The 2014 Youth Olympic Games champion FAN Zhendong had other ideas, as he sensationally defeated the unbeatable MA Long 11-9, 13-11, 11-8, 11-5 in a match which was unpredictably one sided.

After the match, a jubilant FAN Zhendong stated: “MA Long is a very strong opponent, I learned a lot from him in training and in competitions. I am really happy to win such a big title against MA who is the best player in the world. Tomorrow we will head for Anshan for National Championship and then to Germany for Men’s World Cup! Very lucky I can attend the Men’s World Cup after the late withdrawal by Jun MIZUTANI (JPN).”

The Women’s Singles final was a repeat of the epic 2015 World Championships encounter between DING Ning (CHN) and LIU Shiwen (CHN). Just like that fateful night in Suzhou, DING Ning prevailed the China Open trophy to add to her Rio 2016 gold she won last month. The world number two controlled the match and never seemed in doubt, defeating the world number one: 11-6, 8-11, 11-4, 10-12, 12-10, 11-8.

After her victory, the 26-year-old Olympic Champion stated: “Thanks for the fans’ support, they have been really nice here. Recently I have not had too much systematic training since Rio 2016, so I am very happy to be the champion here. The final match against my friend LIU Shiwen was amazing.”

The duo that contested the Women’s Singles final LIU Shiwen & DING Ning were upset in the Women’s Doubles final by their compatriots ZHU Yuling & CHEN Meng. The unheralded duo were too good in the final, triumphing 4-11, 11-, 11-9, 11-5 to clinch the title.