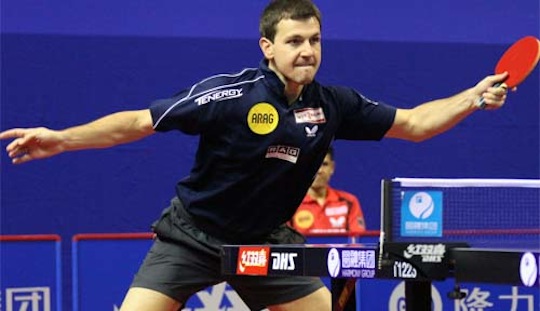 The defeat of Timo BOLL was one of three surprises of note in the Men’s Singles event, as matters progressed towards the quarter-final stage but it was not the biggest upset.

Problems for notable names but for the most notable, the top two seeds, both from China, it was a successful day. XU Xin and MA Lin remained unscathed as did their colleague, WANG Liqin, the no.4 seed. Surprises in the Men’s Singles event and in addition to the demise of FENG Tianwei, there were more upsets in the Women’s Singles quarter-finals.

Defeats for three highly seeded players but there were no great problems for China’s LIU Shiwen, the no.1 seed, nor for colleague FAN Ying, the no.3 seed or Spain’s SHEN Yanfei, the no.4 seed. All booked quarter-final places. Sadness for Singapore and that was further exacerbated in the Women’s Doubles when FENG Tianwei and YU Mengyu, the no.2 seeds suffered a quarter-final defeat at the hands of LI Xiaodan and ZHAO Yan (11-8, 11-5, 9-11, 12-14, 11-8, 4-11, 11-7).

However, for the top seeds, Chinese Taipei’s CHENG I-Ching and HUANG Yi-Hwa; there were no such problems with a penultimate round place being booked. It was the same for the top two pairs in the Men’s Doubles event.

Both from China, CHEN Qi and MA Lin, the no.1 seeds, reserved their place in the penultimate round as did the second seeded combination of WANG Liqin and XU Xin. —- ITTF/ Photo by Fan Shen