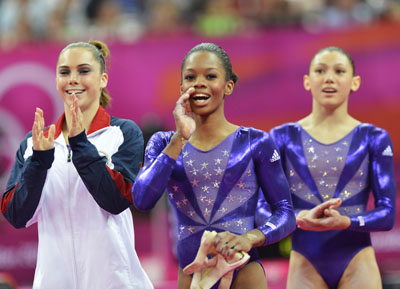 The top eight teams advanced to the final on July 31. The top 24 individual all-around gymnasts (maximum two per country) went through to the Individual All-around Final on August 2, and the top eight gymnasts per apparatus (maximum two per country) reached the Apparatus Finals on August 5 – 7. Scores from qualifications will not be carried over to finals.

USA, the Silver medallists at Beijing 2008 and Gold medallists at the 2011 World Championships, earned the top team totals on Vault and Balance Beam on their way to a total score of 181.863 points. Alexandra RAISMAN, Gabrielle DOUGLAS and Jordyn WIEBER had three of the four highest Individual All-around totals of the field.

Top Individual All-around finisher Victoria KOMOVA (RUS) helped Russia to 180.429 points, qualifying the 2010 World Champions to the final in second place. China, the Beijing 2008 Gold medallists, had the best team total of qualifications on Uneven Bars, and got through in third place with 176.637 points.

Although KOMOVA’s Floor Exercise routine ranked her 28th on that apparatus, she competed dynamically and gracefully on the other three apparatus to lead all qualifiers with 60.632 points.

WIEBER, the 2011 World All-around Champion and a pre-Games favourite for Gold, did not qualify. She was the third highest-ranking USA gymnast, and scored 0.066 higher than MUSTAFINA, but only two gymnasts per country may advance to the final.

On Uneven Bars, 2006 and 2010 World Champion Elizabeth TWEDDLE (GBR) qualified first to the Final, ahead of Beijing 2008 Gold medallist HE Kexin (CHN) and 2011 World Champion KOMOVA.