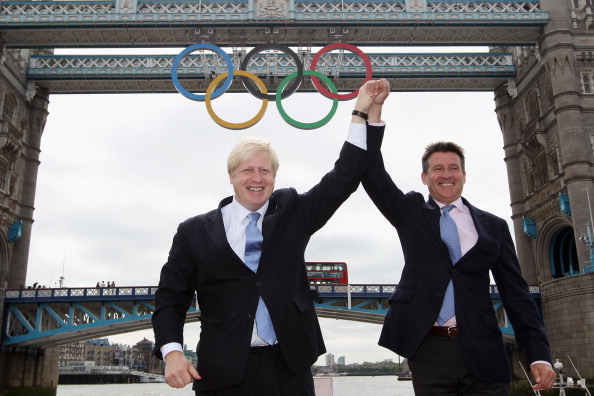 By Tom Degun at Tower Bridge in London: A giant set of Olympic Rings have today been unveiled here at arguably London’s most iconic landmark to celebrate exactly one month to go to the Opening Ceremony of the 2012 Olympic Games on July 27.

Johnson was on the River Thames in a boat located just in front of Tower Bridge which also had London 2012 chairman Sebastian Coe, Britain’s Secretary of State for Culture, Olympics, Media and Sport Jeremy Hunt and British International Olympic Committee (IOC) Executive Board member Sir Craig Reedie aboard.

“Glorious Tower Bridge is recognised the world over and, adorned with the famous Olympic Rings, is the perfect choice to showcase what London has to offer this summer,” the London Mayor said.

“With just a month to go, we are making our final preparations and want to ensure each and every person in the capital gets a flavour of the celebrations and feels part of the Games.

“Our fantastic – and free – cultural festival will be springing up in every London borough, with more surprises over the coming weeks so prepare to be delighted, wherever you are in the capital.”

The Rings, which are the symbol of the IOC, weigh more than three tonnes and measure over 25 metres wide and 11.5m tall.

They are attached to an aluminium grid which measures 17 x 22m.

The total weight of the Rings and grid is 13 tonnes.

The modular construction of the grid means that most of the assembly can be dismantled and re-used after the Rings are taken down following the Olympic Games.

After the Olympics the Rings will be taken down and replaced by a giant Paralympic Agitos – the symbol of the International Paralympic Committee (IPC) – which will be in place for the duration of the Paralympic Games.

“The Olympic Rings are an iconic symbol, inspiring athletes and uniting people around the world,” said Coe.

“To athletes they represent the culmination of thousands of hours of training and reaching the highest level in sport.

“With one month to go to the Olympic Games Opening Ceremony these spectacular Rings on one of London’s most famous landmarks will excite and inspire residents and visitors in the capital.”

The Rings will be visible at night due to an energy efficient lighting system which enables Tower Bridge’s lights to change in colour and intensity.

An illuminating light show will take place on the historic bridge this evening to mark this final milestone on the road to the 2012 Games.

The Rings are the third set of giant Olympic Rings to be unveiled after they appeared at St Pancras International Station last year and at Heathrow Airport earlier this month.

Contact the writer of this story at [email protected]

View all posts by: Abdul Rahim
One Response to “Giant Olympic Rings unveiled on Tower Bridge”