Tokyo, April 10, 2018: The Tokyo Organising Committee of the Olympic and Paralympic Games (Tokyo 2020) today announced that the concept for the Tokyo 2020 Olympic Torch Relay across Japan will be “Hope Lights Our Way”, uniting the Japanese people around messages of supporting, accepting and encouraging one another.

The Olympic flame is often associated with a message of peace and hope, as it is carried around the host nation, and as such has become one of the most powerful symbols of the Olympic Movement. 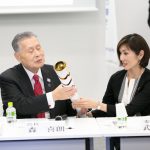 In 2020, the Olympic flame will not only symbolise the sunrise of a new era spreading the hope that will light our way, but will also serve to spread the joy and passion of the Japanese around the Olympic movement as the Games approach.

Tokyo 2020 also announced that upon its arrival in Japan, the Olympic flame will initially be put on display at various locations in the Tohoku region, to help underscore this message of hope in the areas affected by the 2011 earthquake and tsunami.

Only after this will the actual Olympic Torch Relay begin, taking in all 47 prefectures of Japan.

The Olympic Torch Relay will spend:

• three days in each of the three prefectures most affected by the 2011 Tohoku earthquake and tsunami (Fukushima, Iwate and Miyagi)

• three days in each of the four prefectures hosting multiple competitions during the Olympic Games Tokyo 2020 (Chiba, Kanagawa, Saitama and Shizuoka) • 15 days in the Tokyo Metropolitan area

• two days in each of the other 39 prefectures of Japan

Tokyo 2020 has formulated various criteria that will govern the starting point and precise route of the Olympic Torch Relay, which are themselves yet to be announced.

The route will allow for as many people as possible to view the Olympic Torch Relay and will include regional and national landmarks.

It will additionally help showcase the recovery of Japan’s disaster-affected areas and the indomitable spirit of the people living there.

The flame will be carried along its route to Tokyo by many thousands of torch-bearers, with guidelines for the selection of these to be finalised at a future date. —- tokyo2020