Tokyo, July 25, 2018: A “2 Years to Go” countdown ceremony hosted jointly by the Tokyo 2020 Organising Committee and the Tokyo Metropolitan Government was held at Tokyo Skytree® Town yesterday, celebrating another milestone in the build up to the Olympic Games Tokyo 2020 Draws Excited Crowds. 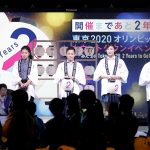 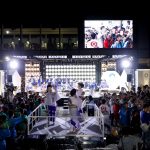 About 40,000 people participated in a number of different events at the ceremony, including the chance to try out four Olympic sports table tennis, shooting, boxing and basketball with those booths attracting children, families and many others interested in Olympic sports and in getting involved in the Tokyo 2020 Games.

Based on a theme inspired by Japanese summer festivals, the countdown ceremony was attended by a number of Olympic athletes and medallists as well as the new Tokyo 2020 Olympic mascot Miraitowa and Paralympic mascot Someity. 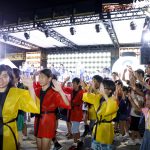 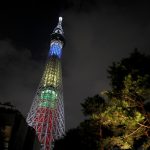 They were joined by elementary school pupils from the local community in a lively celebration to mark the event.

731 commemorative lanterns representing the number of days remaining until the commencement of the Games were unveiled at the ceremony, containing messages from the children and other attendees recording their hopes and aspirations for the Tokyo 2020 Games.

Olympic Games mascot Miraitowa and Paralymipc mascot Someity demonstrated once again their special talents by teleporting themselves from the observatory to the stage to give the cue for the lighting of a huge two metre lantern on stage the last of the 731 lanterns to be lit.

As the stage lantern started to glow, the Tokyo Skytree® lit up in the colours of the Olympic Rings, illuminating the night sky to cheers from the audience.

The special lighting effects at the ceremony were synchronised with the simultaneous illumination of 14 other landmarks across Japan.

The ceremony wrapped up with all participants forming a circle and dancing to the Tokyo Gorin Ondo 2020 dance in a vibrant exhibition of momentum and excitement for the Olympic Games Tokyo 2020, due to open exactly two years from now. —- Tokyo2020