By Robert Fawdon, Paris, Oct 2, 2016: IOC President Thomas Bach has completed a two day visit to Paris – the French capital city bidding to host the 2024 Olympic and Paralympic Games. President Bach completed his visit at a football match between refugees and French athletes organised by the Mayor of Paris, Anne Hidalgo, in the shadow of the iconic Eiffel Tower in the heart of the city. 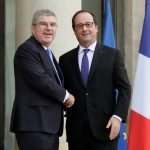 Earlier today the IOC President started the ‘We Run Paris’ 10km run near the Louvre museum. With 13,000 runners taking part, the mass participation event is the latest significant sporting occasion held in central Paris that highlights the city’s expertise and experience in delivering major sports events and the French public’s love and enthusiasm for all sport. 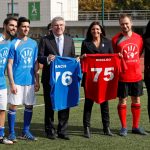 The Paris 2024 bid leaders then presented the bid vision to President Bach at Cite du Cinema – a major European film industry hub and working studio in Saint-Denis that will serve as part of the Athletes’ Village in 2024. Cite du Cinema will be the first athletes’ dining hall in a permanent building and it is located just 1km from the proposed Olympic Stadium (Stade de France) and the new Aquatics Centre.

The presentation highlighted the ambition to deliver an amazing Games and a celebration of sport that harnesses and strengthens the spirit of Olympism in Paris and across France. Rio 2016 Gold Medallists, Tony Yoka and Estelle Mossely (Boxing), and Rio 2016 Silver Medallist, Kevin Mayer (Decathlon), also took part in the presentation.

President Bach went on to view a number of the famous venues in the heart of the city that form a key part of the Paris 2024 Games plan – illustrating the compactness of the plan with the city centre itself, bordered by the River Seine, serving as the Olympic Park hosting world class sport in iconic locations.

The tour included the Grand Palais where Fencing and Taekwondo will take place, the Esplanade des Invalides which will host Archery, the banks of the River Seine where Triathlon and open water Swimming events will be held, the finish of the Road Cycling races on the Champs Elysees and the Eiffel Tower, which will provide a visually stunning backdrop for Beach Volleyball.

Before wrapping up the visit at the refugee football match, President of the French Republic, Francois Hollande, who illustrated his strong support for Paris 2024 by joining the bid delegation at the Rio 2016 Olympic Games, welcomed the IOC President at the Élysée Palace where the delegation enjoyed a private lunch with athletes, Presidents of French sport federations and sponsors.

On Saturday night, Mayor of Paris Anne Hidalgo led President Bach on the Nuit Blanche tour, an annual cultural festival of arts, music and theatre in central Paris. A 6km walk that takes in famous Parisian landmarks along the River Seine including Notre Dame Cathedral and the Louvre, Nuit Blanche runs from dusk until dawn celebrating cutting-edge and contemporary artistry.

“Paris 2024 is a very strong candidate using some of the city’s iconic sights as a backdrop for the Olympic Games.

“It is a project in line with the reforms of Olympic Agenda 2020 particularly in terms of sustainability and legacy with 95 percent of proposed venues either existing or temporary. It also puts athletes at the heart of the Games.

“We are looking forward to a competition between world-class cities each of which delivers for the people of their city, region and country.

“We know that whoever hosts the Olympic Games in 2024 they will be exceptional.”

Paris 2024 Co-Chairman, Bernard Lapasset, said:
“I would like to thank President Bach for taking the time to visit Paris. It has been very useful to hear the President’s views and understand how our bid and the city can help to share the values of Olympism and the Olympic Movement globally amongst a new generation in line with key principles of Agenda 2020.”
“This weekend we have illustrated our commitment to bidding for these Games with new ideas and fresh concepts, learning from the lessons of our past campaigns and setting a new bar in delivering a stunning Games in 2024. We have seen further evidence that sport, and especially Olympic sport, is in the DNA of Paris and France. We have highlighted our compact, city-centre Games plan, and we have seen first-hand the strong support for the bid among the athletes, the public and all levels of government.”

“Paris is one of the world’s most iconic, diverse and welcoming cities with cultural landmarks that will be turned into breath-taking venues offering an incredible live setting and stunning broadcast pictures – the perfect platform to showcase sport. It has been an honour to show President Bach our vibrant city rich with Parisian spirit, world famous art, theatre, cuisine, a love of life and a passion for the Games. We are ready for an amazing centenary party in 2024.”