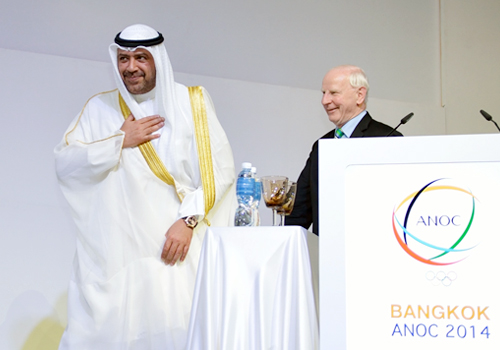 Bangkok, Thailand, Nov 07, 2014: HE Sheikh Ahmad Al Fahad Al Sabah of Kuwait was elected unopposed as President of ANOC for the term 2014-2018 at the XIX ANOC General Assembly in Bangkok on Friday.

The OCA President, who took over as ANOC President in 2012, was standing for his first full four-year term and was the only nomination.

After Sheikh Ahmad left his seat on the top table for the agenda item to be discussed, ANOC Vice President Julio Cesar Maglione made the proposal for the ANOC President and Senior Vice President Patrick Hickey of Ireland for 2014-2018, but before he could complete his statement the delegates from 203 NOCs burst into applause to confirm the appointments.

Mr Maglione declared Sheikh Ahmad as President and Mr Hickey as Senior Vice President for the new term, allowing them to return to their seats.

Sheikh Ahmad thanked the delegates for their trust. “I hope I can continue to work with you with very close cooperation. I will continue to work hard so we can achieve all your goals,” he said.

Earlier in the meeting, the General Assembly passed a new resolution (13.1h) allowing the President to appoint one female member as one of the five representatives of each continent, in consultation with the ANOC vice president of the continent. This new wording for Rule 13.1h would not rule out each continental association from electing female members for the ANOC Ex-Co. —- OCA