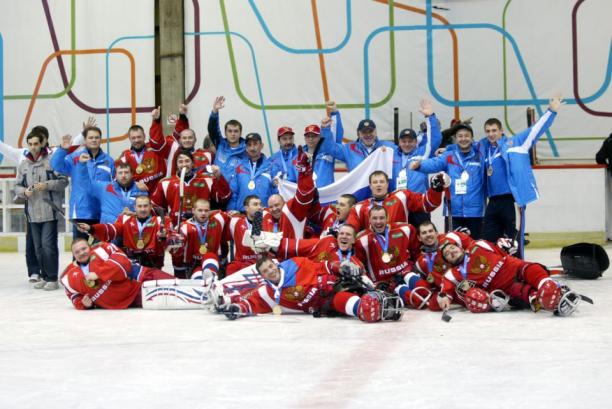 The Russians defeated Sweden, 1-0, in the championship game on 17 November in an intense defensive battle that came down to the final period, with one goal from Engeny Petrov deciding the outcome.

Russia outscored their opponents 20-2 in Novi Sad, recording nearly one-third of the 61 goals scored on the ice throughout the entire tournament, looking much better than they did during their seventh-place finish at the 2011 European Championships.

The team, which received 48 per cent of the public’s vote for Athlete of the Month, will now move up to the A Pool for 2013, with just a little more than a year to go until they host the Sochi 2014 Paralympic Winter Games.

“It was good what we’ve done with the programme,” Russian head coach Sergey Samoylov said.

“We’ve just begun this kind of sport in Russia, and it’s great to be promoted from Pool B to Pool A in just a few years. It’s now our next task to compete with the world’s best in the A Pool and then in Sochi.”

Arguably, it was Russia’s 3-2 win over Germany in a shootout on the second day of the Championships that was the highlight of the week for most fans. The Russian side were very nervous in their World Championship debut, but thanks to Dmitry Lisov’s two goals during regulation they kept the score even to force an overtime period and then a shootout.

Several shots nearly found the back of the net during the shootout, but it was Russia’s Ilya Volkov who had the only successful attempt, giving his team their first win of their undefeated campaign in Novi Sad.

While Russia proved they have a variety of options on the ice, it was Petrov who was the squad’s clutch player down the stretch. During the tournament, he scored four times and recorded 16 shots on goal, with his most important one coming as the only goal scored in the gold-medal game against Sweden.