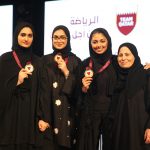 “Sport showcases the very best of humanity and it inspires humanity to give the very best version of itself. It provides hope, opportunity and unity. This is why I love sport so much, and why I am so excited about today’s launch of the QOC’s new brand and strategy.

We are an ambitious and optimistic nation and like every successful athlete, we are determined to continue to better ourselves, push our boundaries, breakdown barriers and re-define sporting greatness. 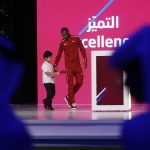 “Today is one of the most important moments in Qatar’s sporting past, present or future. It is a game-changing moment that will open sport up to more people than ever before, create new heroes and fuel future success.

It feels like a sporting revolution and the start of something new. We want the people of Qatar to feel this change, share it, celebrate it, connect to our athletes and support them on their inspirational journeys. We want to unite our whole nation through the power of sport. We are all Team Qatar and I can’t wait for us all to seize this opportunity.”

The logo builds on Qatar’s sporting heritage and patriotic roots by combining the national flag and shield as a symbol of pride, whilst looking to the future with a contemporary, adaptable and innovative design, which is able to adopt multiple forms across modern and traditional platforms.

‘Team Qatar’ will become the public-facing brand of the QOC in a bid to create an image that is fresh, sporty and dynamic, and which represents the unity of Qatar’s entire sporting family. It has been designed to support the QOC’s new strategy by inspiring, engaging and empowering more young people through the power of Olympic sport.

The QOC hopes that the new brand will capture the attention of young people, speak to them in a language that they understand and create an identity that they associate with their sporting heroes and which they are proud to wear and share.

Explaining more about the story of the brand, H.E, Sheikh Joaan said:

“Our new brand will reflect the values of our nation, and the values of sport. Like Qatar, it is young, bold, passionate and dynamic. It shares our nation’s ambition, our optimism and our pride in the strength and ability of our people. It is a brand for our future and one that we hope will inspire, empower and educate our young people through the transformational power of sport. We hope that it will inspire future champions in sport and for sport.”

The QOC believes that Team Qatar’s athletes are the most powerful tool to engage young Qataris in sport. The roll out of the new brand will focus on raising awareness of Qatar’s athletes, building their fan bases and creating a compelling connection between Team Qatar and the community, in order to encourage increased sports participation at every level – not just as champion athletes, but at school, with family, at clubs – or as coaches, officials, volunteers, administrators and more.

To help achieve this ambition, the QOC has also today launched the ‘Team Qatar Club’, a new online sporting community. The digital fan club will feature as a private, members-only area on the new Team Qatar website and will provide exclusive and behind the scenes content about the incredible journeys of Qatar’s athletes – together with tips, advice, competitions, offers and much more.

Joining the fan club is quick and easy and users can sign up using existing social media handles or an e-mail address here.

“I urge all my friends to join me in becoming a member of the Team Qatar Club! This will be the place to go for everything you need to know about our athletes and sport in Qatar, get health and fitness tips from the best, and connect with other sports fans!

I can’t wait share my stories, get closer to our sporting community and show the fun, exciting and human-side to sport. I hope that we are able to inspire our whole country to get involved with and enjoy sport!”

Information about the QOC’s overall new strategy for sport in Qatar was also unveiled today, following a three-year process to develop world-class structures, processes and performance measures that will ensure that Qatar is achieving optimal sporting success on multiple levels.

The strategy aims to optimise partnerships between all of Qatar’s sporting entities, uniting everyone behind one, shared vision to become a leading nation in bringing the world together through sustainable sports development.

For the first time, the QOC’s strategy incorporates the work of its National Federations to ensure a unified approach to delivering the key objectives of creating a more active society, improving sporting performance and being a leader in promoting and progressing the Olympic Movement. More details about the QOC’s strategy can be seen in this film.

Following the end of the launch ceremony, the QOC hosted its annual Sport Excellence Awards, recognising and celebrating the athletes, organisations and individuals who have played a significant role in achieving sporting excellence for Qatar over the past year.

Key awardees included Mutaz Barshim, who won Male Athlete of the Year following his gold medal at the 2017 World Athletics Championships, Sara Al Manaei, who won Female Athlete of the Season, following her two gold medals in last year’s Junior Arab Athletics Championships, and Ahmed Ali Al-Ansari, who won the Service to Sport Award for his huge contribution to the development of youth sport in Qatar.