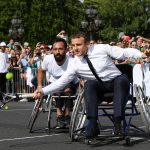 Led by Paris 2024 Co-Chair Tony Estanguet and Paris Mayor Anne Hidalgo, the two-day festival saw over 30 sports take place in the heart of the city, transforming it into Paris 2024’s vision for a city-wide celebration of sport and demonstrating the city’s readiness to host an incredible Games in 2024. Over the two days, 1.12 million people took part in the city’s sporting festivities.

The whole of France got behind the event, with the public mobilising online around the hashtag #ReadyFor24. Sporting festivities startedon Friday with Tony Estanguet, three-time Olympic Canoe-Slalom Champion, leading a flotilla of more than 200 kayakers along the Seine, before joining Mayor Hidalgo on a floating 100 metre Athletics track in the middle of the river for the official opening. 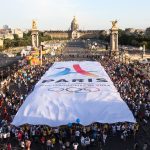 Other highlights included a High Diving on the Pont Alexandre III bridge, mass-participation sporting activities at the grounds at Les Invalides, Trampolining in the gallery of the Petit Palais and a mass Cycling event on the Champs-Élysées, turning the Arc de Triomphe into an open-air velodrome.

More than 250 French athletes and Olympians and France’s sporting federations took part across the two days, helping to deliver a full-scale preview of what an Olympic and Paralympic Games might look like in Paris should the city be successful in its bid for 2024.

The universal support the bid attracts from across all sectors of French society was on full display as members of the public turned out in force to take part and celebrate Olympic sport.

The event concluded today with President Macron greeting athletes and participating in Tennis and Boxing events on the Pont Alexandre III bridge and on a floating platform on the River Seine – to the delight of thousands of cheering fans. Athletes from across Paris and the country, who had taken part in a race to collectively cover 2,024 kilometres over the two days, also gathered in the city-centre to mark the end of the two-day Olympic sport festival.

“Today we showed that our project has truly captured the imagination of the French public with one million people joining us to celebrate Olympic Day in Paris and take part in this incredible celebration of sport and culture.

“As a city and a country, our passion and commitment towards hosting the Games is unmatched. We have demonstrated beyond doubt that we are ready to welcome the world in 2024 and have put on display, for all see, our vision for a city-wide celebration zone in the heart of our iconic city – Paris Olympic Park is alive with the energy and excitement of a city rooted in the spirit and tradition of Olympism and a determination to achieve our Olympic dream.”

“Our city has been transformed into a gigantic sports park, providing a breathtaking backdrop from which to celebrate the Olympic values on Olympic Day. I couldn’t be more proud of the passion and enthusiasm on display by Parisians and visitors to the city. These two hugely successful days once again demonstrate how ready Paris is to share its love for sport and its eagerness to host the Games in 2024.” — – Photo. Philippe Millereau /KMSP & Ville de Paris. PARIS 2024