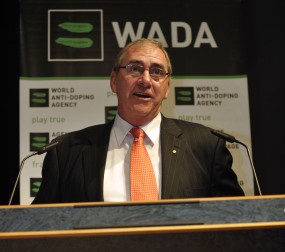 Montreal – Canada, July 10, 2012: doping athletes, World Anti-Doping President John Fahey has called on athletes who are doping to withdraw from their national teams and stay away from the London 2012 Olympic and Paralympic Games.

With less than three weeks to the opening ceremony of London 2012, Mr. Fahey has taken the opportunity to highlight the rights of all clean athletes to compete on a level playing field and to gain due reward for their hard work and natural talent.

“I say this in the clearest way possible: if you are a doping athlete and you are planning to compete in London then you must withdraw from your Olympic team,” said Mr. Fahey.

“Doping is cheating, plain and simple. And if you compete in London as a doped athlete then not only will you be cheating your fellow athletes, you will be cheating sports fans across the world, doing a disservice to your national flag and flouting the ideals of the Olympic Movement.

“A doping athlete cannot achieve success, it is a complete contradiction. Even if a doping athlete were to win a medal he or she would never be able to look at themselves in the mirror and say ‘well done, I deserved this’.

“The Olympic Games is the absolute pinnacle for many athletes, and for them to train endlessly over a four-year period and then have their efforts belittled by a doping athlete, to me that is complete and utter betrayal of what sport stands for.”

Mr. Fahey also applauded the efforts of the world’s anti-doping community in trying to identify doping athletes ahead of the Games, as well as the International Olympic Committee and Games organizers LOCOG for preparing a comprehensive anti-doping program.

“These will be the most tested Games in Olympic history and doping athletes must know that they will be under the severe scrutiny of anti-doping officials from the moment they set foot in the Olympic Village,” added Mr. Fahey.

“The IOC and LOCOG have prepared an extensive anti-doping program that will analyse up to 6,250 samples while the anti-doping authorities are already sharing intelligence to assist with target testing of athletes under suspicion.

“I should also add that UK Anti-Doping is mandated to test athletes in training camps ahead of the Games and has also compiled much intelligence with the co-operation of anti-doping organizations worldwide.

“There has been a coherent effort to make London 2012 as ‘clean’ as possible and doping athletes should know that their chances of avoiding detection are the smallest they have ever been.”

Despite the work of the world’s anti-doping community, Mr. Fahey stressed that ultimate responsibility lay with athletes as to how free of doping London 2012 will be.

“The world’s ant-doping community can only do so much. If every athlete decides not to dope then we will have a completely dope-free Games, that’s the simple reality.

“It is up to the athletes and I urge them to collectively take more responsibility for the sake of clean competition.”

Mr. Fahey will be available for further comment at WADA’s pre-Olympic press conference in the Olympic Park at 14:00 on July 25. —– WADA