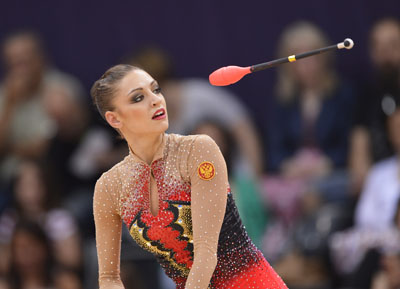 London – GBR, August 11, 2012: With Russian flags rippling around Wembley Arena and louds shouts from her supporters, Evgeniya Kanaeva took an elegant leap into the Olympic record books on Saturday as she became the first rhythmic gymnast to retain the Individual All-around Gold medal. Kanaeva won with a total of 116.900 points, with her compatriot Daria Dmitrieva second with 114.500 and Liubou Charkashyna third with 111.700. With her unmatched apparatus handling technique, risk combinations and musical interpretation, Kanaeva was the only gymnast to earn 9.900 points on any apparatus.

The Russian set the tone for a near-faultless show of Rhythmic Gymnastics by scoring 29.350 for a superb Hoop performance, including 9.900 for difficulty – a step up in class after her errors on that apparatus in qualification. She was top scorer on Ball and Clubs too and it was on the latter apparatus, in the third rotation, that she earned 9.900 for artistry en route to scoring 29.450 points. A champion at 18 in Beijing, the 22-year-old said: “It feels even better this time. Four years ago I couldn’t even dream I would be at a second Olympics with a second medal.”

Asked about her legendary status in the sport, the three-time World Champion added: “It was not my target to be a legend, but I do like the sound of it. I love Gymnastics and I want the audience to remember me.” Kanaeva refused to be drawn on the prospect of defending her title in Rio in 2016, however. It is considered likely that she will have retired by then, although she offered a teasing reply when asked if the day would come when her rivals might have a chance of Gold themselves. “I hope I live long enough to see that day,” she said with a flash of that trademark smile. 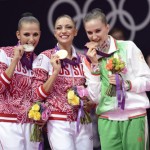 “Molodets” – clever girl – was the cry coming from the celebrating Russian fans in the arena and that could have applied to Silver medallist Dmitrieva too as she ensured a one-two to match Alina Kabaeva and Irina Tchachina’s success at Athens 2004. Dmitrieva was second-top scorer on the first three routines before finishing with a flourish as she earned 29.100 for her efforts on Ribbon – the only apparatus on which she outdid Kanaeva for difficulty.

“It was hard for me to get this medal and I am very happy,” said the 19-year-old. “I’m not only proud of myself, I am proud of my country. There are so many people [to thank] – our wonderful coaches and our parents.”

The Bronze medal went to Belarus’s Charkashyna after a compelling battle with Aliya Garayeva and Son Yeon-Jae. The 24-year-old punched the air after completing her poignant, precise ribbon routine to the theme from ‘Love Story’, and then burst into tears of triumph.

Explaining her reaction, she said: “It is the Olympics and you feel this immense responsibility as you’re representing your country, and that amplifies everything.”

Charkashyna had failed to qualify for the final in Beijing when, by her own admission, her mistakes consigned her to 15th place. She added: “I came here hoping to do my best and was well aware this is probably my last Olympics because of my age. The victory I had to win was a victory over myself after what happened in Beijing.”

There were also tears for Azerbaijan’s Garayeva but hers were the product of seeing her medal hopes disappear. Garayeva could not have come closer, missing out on a Bronze by 0.125 points. “It is the most disappointing thing, because I was only one step away from getting a medal,” she said.

Son, the teenager from the Republic of Korea, had her own hard-luck story after slipping from third to fifth on the back of a disappointing Clubs routine. She dropped both of her clubs yet responded with a typically elegant performance on Ribbon – she was third top scorer on both this apparatus and Ball, and the crowd’s response as she left the mat showed just how much she had endeared herself to them.

Moreover, as the youngest competitor in the final at 18, Son – who was 31st at the World Championships in 2010 – can take great heart from her first Olympics. “It’s given me a lot of hope,” she said, looking to the future. “My time to win a medal at a major championship has to come.”

That is for tomorrow, of course; today is all about Kanaeva. Clever girl indeed. —- FIG