By Robert Fawdon, Sept 8, 2016: Paris, the French capital city bidding to host the 2024 Olympic and Paralympic Games, has been placed fourth in the new PwC “Cities of Opportunity” global report which benchmarks the qualities that make business, finance and culture capitals successful. The report had a particular focus on education, transport, health, economies and governance. 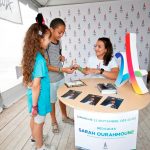 Paris jumped from sixth overall in 2014 to fourth place with an increase in four of the ten key indicator groups. The city also finished in the top 10 in nine out of the 10 indicator groups – the only city to achieve that accomplishment, these were:

Paris finished top in the demographics and livability indicator group and also scored well in intellectual capital and innovation – reaffirming the city’s status as a connected technological hub and a sharing city.

In reference to Paris, the report said, “The City of Light radiates as brightly as ever”, and praises the city’s consistency across the board, its brilliance and mass appeal.

On Paris’ improvement from sixth place in 2014 to fourth in the new edition, the report also added, “this is the most gratifying, and surely the most inspiring, result in Cities of Opportunity.”

“We are delighted with Paris’ impressive showing in this report on influential cities around the world. The fact the city improved from sixth to fourth in the last two years also shows that Paris is on an upward curve. The impressive performance across all indicators – from innovation, to sustainability, to transportation – is very encouraging. This highlights the contemporary nature, growing strength and continued global stature of Paris.

“As we continue to develop the city’s bid for the 2024 Olympic and Paralympic Games we take renewed strength from this report. It confirms the DNA of modern Paris is at the heart of our bid and that our city would deliver a Games celebrating sport and Olympism right at and from its heart.”

“Paris is an upwardly mobile, ambitious, innovative, dynamic and cosmopolitan city and this report captures those qualities and the global recognition of modern Paris. I am very proud of what this report says about this great city. The qualities of the city are also totally reflected in our bid and the 2024 Games plan.

“The PwC report is a further boost to our campaign.”