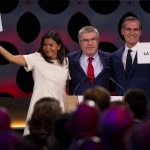 The decision is the climax of a two-year journey that has seen the Paris 2024 team assemble and promote a stunning, innovative Games plan.

Led by Bid Committee Co-Chair and now Organising Committee President, Tony Estanguet, the Committee delivered a final presentation to the IOC before a vote of the Members confirmed that the city would host the Games in 2024.

To celebrate the historic decision a statue of the Olympic Rings was erected at the Trocadero, just in front of the iconic Eiffel Tower. The Rings will remain in place until September 17, before they travel around the city for the people of Paris to enjoy.

“This is a wonderful moment for the people of Paris and France and also the Olympic Movement. The Games are coming to Paris for the first time in 100 years and we will deliver an amazing celebration of sport at the heart of one of the world’s greatest cities.

“I want to pay tribute to the energy and inspiration of the team and all our stakeholders for achieving this incredible victory. and say thank you to the IOC for granting us the right to host the Games. This historic decision would have not been possible without the commitment and passion or our team, our city, our country, together we have achieved our mandate to bring the Games to Paris in 2024.

“We are honoured and proud to have been chosen as Host City, we will enjoy the moment and begin our work to deliver everything we have set out in our bid. This is a special day.”

“It is a historical moment: 100 years after 1924, we bring the Games back to Paris! This victory is all the more beautiful because it is collective, generous effort. My first thoughts go to the Parisians and the citizens of the Paris region, especially the inhabitants of the Seine Saint Dens, who thanks to the Games will see their daily life improve.

“I want to tell them, as well as to all French people, that these Games will be a real accelerator of ecological transition, job creation and solidarity. They are the confirmation of a positive future for our youth. Let’s be proud! When Paris takes up the challenges of the 21st century, it is all France that wins.”

“This is a historic and momentous moment for French sport. The Olympics and Paralympic Games have the ability to inspire people, and hosting the Games in 2024 is a boost for sport across our nation.

“We have been on an incredible journey together with such an amazing team who have created a new momentum for our sports movement. The future of French sport is now changed forever, and the hard work begins again as we commit ourselves to delivering the best possible Games and a lasting and real legacy.”

“This victory is a victory for all of France. It is an immense pleasure and a great honour to have been involved as Co-Chair of this brilliant Bid Committee. I have been lucky in my life and in my career to live many great sports moment and September 13, 2017 is a date that now enters the history of French sport.

The Games are back in Paris, a hundred years on, and this is a great news for France and the entire sports movement!”
Laura Flessel, French Minister of Sport, added:

“This moment is both the climax of an incredible journey and the beginning of a new adventure. The awarding of the Olympic and Paralympic Games to Paris is the result of more than two and a half years of collective work, and I would like to thank all the partners who have invested in this beautiful project, starting with the athletes.

“It is also the beginning of a new adventure, because a lot of work is waiting for us to organize a Games to match our ambitions, and one which will leave a lasting legacy to Paris and throughout France. Hosting the Olympic and Paralympic Games is an investment in the future and the State has been fully mobilized since the launch of the candidature.”

“I am very pleased with this decision. It is a tremendous opportunity for the Paralympic movement. The French Paralympic Committee has united alongside the bid committee of Paris 2024 and as a founding member, we can be proud of this historic achievement.

“The IOC’s awarding of the Olympic and Paralympic Games to Paris in 2024 will allow us to make a giant leap in the future of French sport. We will have unprecedented visibility and media coverage for the world’s best Paralympic athletes. Organizing an event of this magnitude is an incredible opportunity to improve citizens’ everyday lives in terms of accessibility and to increase access to sport for all people with impairments. These Games, in Paris, in 2024, will be the Games to be shared by all!”

“We have the Games! Let us be happy, let us be proud because France wins! The Games are a dream of ours, and it is now a reality. This is a fantastic spotlight on our athletes, on the talents of our youth and the know-how of our organisations.

Through the journey, we have managed to overcome our difficulties to work together – the sports movement, the State, the Region and the City – to create a formidable project that will change our region and our country. “

“Having been at the heart of all the previous French candidates since the early 80s, this victory is particularly emotional. It is the fruit of a collective effort and demonstrates that together, united by a joint passion, we can accomplish great things.

Paris 2024 is a beautiful project. It is undoubtedly the most accomplished and ambitious of all. It is more than a project for Paris, it is an ambition for our whole country.” —- Image: IOC