By Ameli Fisher, Lausanne, Switzerland: July 1, 2016: Anne Hidalgo, the Mayor of Paris, and a senior Paris 2024 bid delegation, today met with International Olympic Committee (IOC) President Thomas Bach and his team to discuss the French capital city’s candidature to host the Olympic and Paralympic Games in 2024. 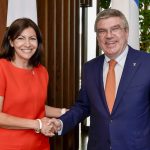 “I was delighted to meet with President Bach today and hear his thoughts on how our Paris 2024 bid is progressing.

This was also an excellent opportunity to share Paris’ vision and ambition to deliver a spectacular Games in 2024 that will place sport and Olympism at the very heart of the city and across France.

“I look forward to working closely with my Paris 2024 colleagues to now take our bid to the next stage of the campaign. Our close collaboration is a great asset for our bid that underlines the unity between the city and the sports movement.

I would like to extend my thanks to President Bach for his helpful views and for welcoming us in Lausanne.”

“We are grateful for the opportunity to visit the IOC President in Lausanne today.

We are very pleased with the way our bid is evolving and we greatly value the opportunity to sense check our plans with the IOC and gain invaluable feedback at every opportunity.

“As I stepped down as World Rugby Chairman yesterday, it is a great honour for me to dedicate my full time to the Paris 2024 bid.

I had the joy of leading Rugby’s successful campaign to become an Olympic sport and I hope now my bid colleagues and I can deliver the same success for Paris 2024.”

President Bach said that he was delighted and honoured by Ms Hidalgo’s visit: “We feel that the Paris candidature is really unified.

Your file is solid and your approach is in line with the principles of Olympic Agenda 2020, especially with regard to sustainability and legacy.

I congratulate you on all the work accomplished so far,” he said at the end of the meeting. “We wish the Paris candidature every success,” he added.

It was also confirmed today that President Bach would visit Paris in October as part of his tour of all bid cities.