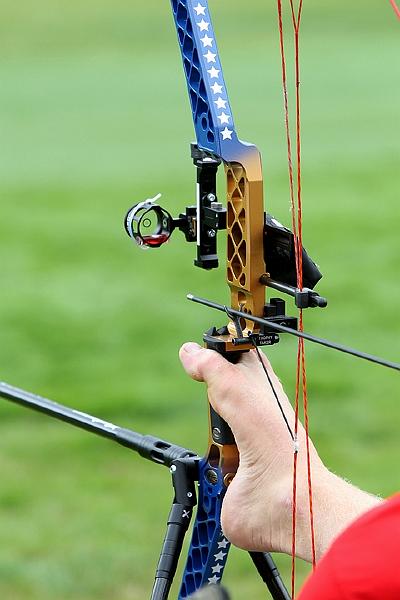 London – GBR, August 30, 2012: Three Paralympic records fell on the first day of archery at Royal Artillery Barracks despite terrible weather on the ranking range. Amid an onslaught of wind and rain, Russia and Great Britain delivered strong performances in closely fought men’s and women’s matches in the morning and afternoon sessions. In the women’s events, China put their stamp on the recurve standing class, claiming the top two spots. 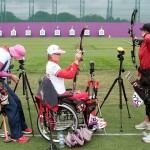 In the final men’s ranking event of the day, USA’s Matt STUTZMAN lived up to the hype surrounding his first Paralympic Games appearance, finishing 12 points clear of second place on 685 points.

Iran showed they will be formidable opponents in the recurve events with Zahra NEMATI finishing first in her W1/W2 class, while teammates Ebrahim RANJBARKIVAJ and Zahra JAVANMARD finished second and fifth in their classes.

The athletes also enjoyed the visit of General Martin E. DEMPSEY, Joint Chiefs of Staff of the American army.

Competition was close though with world No.1 Ebrahim RANJBARKIVAJ (IRI) finishing only two points behind TSENG, after equalling his second half score of 331. CHENG Changjie (CHN) and Oscar de PELLEGRIN (ITA) were even closer together in third and fourth, being separated by a single point with 626 and 625.

A Paralympic record of 613 was set by Zahra NEMATI (IRI), beating the former top score held by XIAO Yanhong (CHN) by two points. XIAO had to settle for third place in ranking, behind Elisabetta MIJNO (ITA), who scored 588.

One point was enough to give GAO Fangxia (CHN) the top spot over Milena OLSZEWSKA (POL), as they scored 581 and 580. YAN Huilian (CHN) scored 573 to take third place in a low scoring session due to strong wind and rain.

David DRAHONINSKY (CZE) demonstrated why he is world No.1 and favourite in the men’s compound W1 event with his score of 662 – just three points short of his Paralympic record and three points ahead of world record holder Jeff FABRY (USA), who shot 659. Both DRAHONINSKY and FABRY were well ahead of third place archer Peter KINIK of Slovakia, who reached a total of 635 for his 72 arrows.

Defending Paralympic champion Danielle BROWN (GBR) continued her domination of the women’s compound open event. BROWN’s score of 676 is her lowest of the season, but still put her ahead of Russia’s Stepanida ARTAKHINOVA who scored 672 for second place. It was another first and third placing for GBR as Mel CLARKE came in 24 points behind ARTAKHINOVA on 648.

The top ranking position went to the British team with a score of 1,879, 10 points ahead of Russia, who lead third place China by 11. The men’s teams will meet in the last eight on Tuesday 4 September.

The Chinese women had a very impressive ranking round and beat the second-placed Iranian team by 68 points, 1,714 to 1,646. Korea came in third place with 1,639 but will hope to get closer to the top two in the women’s team eliminations and finals on Wednesday 5 September. —- WA