Home  »  OLYMPIC   »   Paralympians from Yesteryear to be Torchbearers 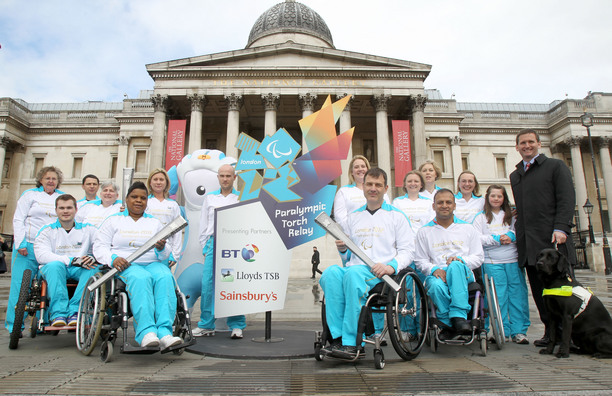 London – GBR, August 27, 2012: Five Paralympians who each competed in one of the first four Paralympic Games will act as the first team of torchbearers when the London 2012 Paralympic Torch Relay gets underway on Tuesday evening (28 August. Over the next 24 hours, 580 inspirational torchbearers will carry the Paralympic Flame from Stoke Mandeville in Aylesbury, the birthplace of the Paralympic Movement, to the Olympic Stadium, Stratford, the venue of Wednesday night’s Opening Ceremony.

Amongst the torchbearers will be 15 Paralympians – one from each of the summer Paralympic Games from 1960 through to 2012 – who have been brought together by the International Paralympic Committee (IPC).

The Paralympic Flame will be created in a special lighting ceremony at Stoke Mandeville on Tuesday evening by uniting four national flames created in Belfast, Cardiff, Edinburgh and London. The Flame will be captured from the cauldron in a mirrored torch before the first group of torchbearers will start it on its way to the Olympic Stadium .

This group will include:

The IPC President took part in five Paralympic Games between 1972 and 1988 mainly in wheelchair basketball, however in 1972 he also took part in swimming. He was elected IPC President in 2001 and is currently serving his third term.

The 77-year-old represented Great Britain at the first two Paralympic Games in the sports of swimming and table tennis. In Rome she won a gold and silver medal in the pool and took a bronze in the women’s doubles in table tennis. Four years later in Tokyo she claimed three silvers in swimming, won doubles gold in table tennis and also took a silver in the singles.

In eight Paralympic Games she won an incredible 17 medals, including 10 golds. She is best known as a fencer but also won medals in athletics, wheelchair basketball, swimming and table tennis.

Sally took part in the first Paralympic Games in Rome in 1960 and went on to compete at a further three Games.

Jane took part in a total of five Paralympic Games between 1972 and 1992 participating in archery, athletics, lawn bowls, swimming and table tennis. In her first Games in 1972 she won a silver and bronze in archery and gold and silver in table tennis. By the time she retired after the Barcelona Games she had won 11 Paralympic medals including five golds.

Sir Philip Craven, IPC President, said: “We are delighted that a Paralympian from every single summer Paralympic Games is taking part in the Torch Relay. Bringing all these people together is an achievement in itself and it will be fantastic to see them all in action en-route to the Opening Ceremony.

“The Torch Relay is a significant event in the staging of every Paralympic Games. With London 2012 it has extra significance as it will start from Stoke Mandeville, the spiritual birthplace of the Paralympic Movement back in 1948.

“It is only right that we celebrate our rich and proud heritage by inviting Paralympians from every Games to take part in this historic relay. From 1960 through to 2008 I am sure all of them will have superb and inspiring stories on why they are a proud Paralympian.”

In addition to the first group of five torchbearers a further nine Paralympians will also be involved in the Torch Relay during its 24 hour journey to the British capital. They are:

James took part in three Paralympic Games – 1976, 1980 and 1984 – amassing 13 swimming medals. At his first Games in Toronto he won two golds and two silvers, a feat he repeated four years later in Arnhem. At his final Games in 1984 he won one gold, one silver and three bronze medals.

Wilson took part in three Paralympic Games, her first in 1980. Over the course of three Games she won a total of 10 medals including 1 gold, 4 silvers and 5 bronze medals.

Over the course of five Paralympic Games, starting in 1984, Noble won four golds, 10 silvers and one bronze medal in swimming events. His final Games were in Sydney in 2000. During London 2012 the 47-year-old will be commentating for UK broadcaster Channel 4.

Seoul was Porcellato’s first Paralympic Games and she has competed in every single one since. During six summer Games the T53 wheelchair racer has won two gold medals, three silvers and five bronze medals. The 41-year-old has also competed at the last two Paralympic Winter Games in Torino and Vancouver winning gold in the 1km sprint in cross country sit skiing in 2010.

Mullins is a former 100m, 200m and Long Jump world record holder who competed at the 1996 Atlanta Games. Today she is an actress and fashion model and has been named one of People Magazine’s 50 most beautiful people. For London 2012 she has been named Team USA’s Chef de Mission.

McCollough was a member of the USA football 5-a-side team that competed at the 1996 and 2004 Paralympic Games.

Goalballer Dietz has competed in five Paralympic Games, having made her debut in Seoul in 1988. In Atlanta she won gold after Germany defeated Finland 3-1.

The T53 racer will be competing in his third Paralympics in London having already medalled at Athens and Beijing. In Athens he won gold in the 100m and 200m and took silver in the 400m. In Beijing he won 400m gold, and bronze in the 200m and 800m.

The four individual Flames were then placed in a miner’s lantern and transferred to the nation’s capital cities. Paralympic celebrations have already taken place in London, Belfast and Edinburgh and a final one will take place on Monday (27 August) in Cardiff. From here, the four National Flames will be travel to Stoke Mandeville, where they will be united during a special ceremony on Tuesday to create the London 2012 Paralympic Flame. —- IPC/Image © Getty Images