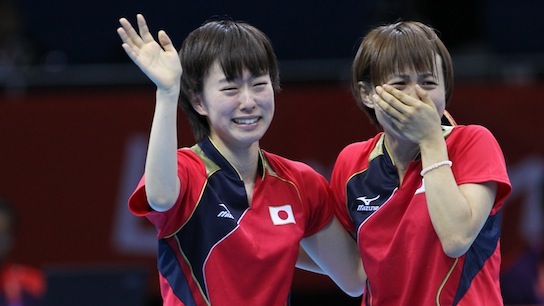 London – GBR, August 05, 2012: Japan are through to Tuesdy’s final after beating Singapore 3-0 and will win at least a silver medal. Ai FUKUHARA (JPN) set Japan on their way in the first match, showing her strength close to the table by beating women’s singles bronze medallist FENG Tianwei (SIN) 3-1. Kasumi ISHIKAWA (JPN) followed FUKUHARA’s lead, conceding just 13 points to WANG Yuegu (SIN) in a 3-0 singles win, and the doubles match was also a one-sided 3-0 affair. Japan will face China or Korea in the final, with the two scheduled to meet in the second semifinal on Monday. 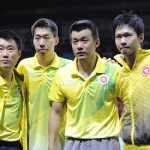 The men’s team semifinal places were decided on Sunday, with China again the most impressive team. No.1 seeds China continued their inexorable advance, rapidly disposing of Singapore 3-0 in their quarterfinal. Their most impressive performer was MA Long (CHN) who used his phenomenal forehand to devastating effect in his singles match, defeating GAO Ning (SIN) 3-0 in 23 minutes.

China will face Germany in the semifinal after Germany beat Austria by the same score and in a similarly comprehensive manner. Timo BOLL (GER) was the outstanding figure, excelling in his 3-0 singles defeat of former world champion Werner SCHLAGER (AUT). BOLL also teamed up with Bastian STEGER (GER) to win the doubles 3-0. Germany will be hoping that BOLL has recovered from a disappointing singles event, in which the No. 4 seed exited in the fourth round.

Hong Kong, China secured a semifinal berth by beating Japan 3-2. Jun MIZUTANI will perhaps be the most disappointed player of the quarterfinals. MIZUTANI won both his individual matches 3-1 but his teammates were unable to secure the vital third win, and Hong Kong, China won the tie in the fifth match when TANG Peng (HKG) beat Olympic debutant Koki NIWA (JPN) 3-1.

Portugal Close to the Semifinals

The last semifinal place was taken by Korea after they overcame a valiant Portugal side 3-2. Portugal threatened one of the shocks of the tournament when they established a 2-1 lead against No.2 seeds Korea, with Marcos FREITAS (POR) winning in the singles and Joao MONTEIRO/Tiago APOLONIA (POR) winning in the doubles match. But after Korea won the fourth match of the tie to level 2-2, Athens 2004 Olympic champion RYU Seungmin (KOR) took the final singles match 3-1 to give Korea victory. —- ITTF