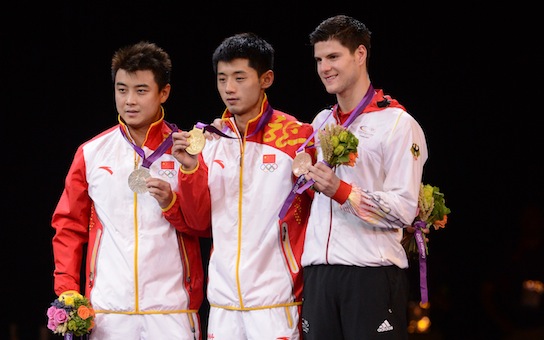 WANG must be content with a third Olympic silver in the men’s singles, after losing in the final at the Athens 2004 and Beijing 2008 Olympic Games. Ma Lin, former Olympic champion in Beijing, was in the venue to see this fantastic match between the top seeds players.

The German men’s team coach, Jorg ROSSKOPF (GER), was his country’s first medal winner when he also claimed bronze at the Atlanta 1996 Olympic Games. In Beijing Olympic Games 2008, Germany’s team won the only medal for Europe.

On Friday, 3rd August, team events will start with some players who didn’t play the singles. Matches will start in ExCel at 10.00 am with the Round of 16 women team events.

ZHANG Jike (CHN): “I’m very excited, it’s my first time at the Olympics and it has been my dream to win the gold medal since I started playing. With Wang Hao, when we are not competing we are like brothers. When we are playing a match I cannot say we are enemies. We can still play against each other and be friends.”

WANG Hao (CHN) – silver: “Everyone wants to win the gold, but I lost to a teammate so it’s not so serious. I’ve done my best.”

Dimitrij OVTCHAROV (GER) – bronze: “To me it feels like gold. He also deserved to win but I’m just so happy. I can’t believe it has happened. I did not start so well being down in the first, fourth and final games. In the last game, I was down 7-2 and I was already thinking of a seventh game. But I kept getting points and all of a sudden it was over. It’s very tough playing against Asians, you get one victory in 10 games. They never give you an opportunity. So you have to take your chances. When I was a teenager CHUANG Chih-Yuan was almost an idol because he was such an aggressive player from both sides. That’s why I said ‘sorry’ to him at the end.” —- ITTF