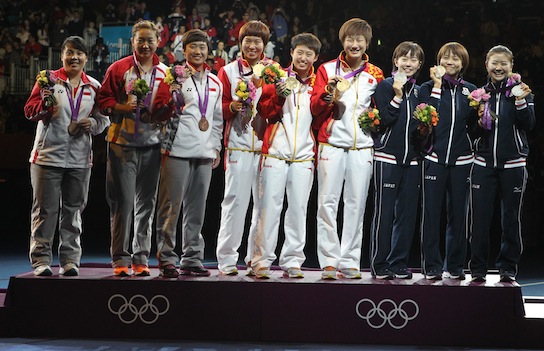 London – GBR, August 07, 2012: Title Again, China won its third gold medal at table tennis, beating Japan 3-0 in the women’s team event at ExCel on Tuesday. China’s women have dominated the table tennis competition, winning gold and silver in the singles, and easily defended the team title they won at the Beijing 2008 Olympic Games. They lost only four games in all their team matches on their way to gold.

In the first singles match, LI Xiaoxia (CHN) beat Ai FUKUHARA (JPN) 3-1. FUKUHARA briefly threatened by taking the second game of the match, but the new Olympic women’s singles champion LI’s all-round game was too strong for the Japanese No.2.

World No.1 DING Ning (CHN) then dispatched Japan’s rising star Kasumi ISHIKAWA 3-0. Despite ISHIKAWA’s latest world ranking of six, there was a gulf in class between the two players.

In the third place playoff, Beijing 2008 Olympic Games silver medallists Singapore defeated Korea 3-0. The hugely successful Singapore trio of FENG Tianwei, LI Jiawei and WANG Yuegu were probably playing as a team for the last time at a major event and won Singapore’s second table tennis bronze medal of the Games, after FENG won bronze in the women’s singles.

DING Ning (CHN): “I want to thank everyone watching us in China. It is very late there so we must say thank you. It’s been amazing and I’m so happy we could repay all their support. I’m really proud. Of course today I’m really excited. I’m very happy for the result, especially after 2010 when we lost. Today we put that behind us and continue to have great success.”

LI Xiaoxia (CHN): “I say thank you to the whole team, it has been an amazing Olympics.”

Kasumi ISHIKAWA (JPN) – silver: “I am so happy to play in it but China were too strong (to beat).”

Sayaka HIRANO (JPN) – silver: “This is the biggest table tennis event in the world and I am so happy to achieve this silver medal.”

Ai FUKUHARA (JPN) – silver: “I got to play against the world Champion (DING Ning, CHN). I just wanted the match to last for one minute longer. I am so happy. I gave everything and tried my best.”

LI Jiawei (SIN) – bronze: “I think this game showed that our team is an excellent team, especially that we recovered from our 3-0 defeat in the semifinal and went on to win today. It’s the first time I’ve taken part in the singles event at the Olympics so I was a little nervous. But I also had confidence in myself and I think I did well. I got a bronze and I’m not too disappointed with that.” Since taking part in the Beijing 2008 Olympics, and having a child this was my most important match. It was my dream to get a medal, and although it was a silver in Beijing 2008 and only a bronze this time, still it means a lot to me.”

KIM Kyungah (KOR): “I thought we had prepared well for the Olympics, but the result didn’t go the way we wanted. I’m very disappointed. We did everything that we’d prepared for, but they were stronger. A lot of people had high expectations and we wanted to live up to them, but I think there was additional pressure.” —- ITTF