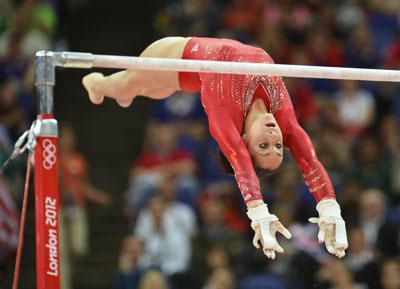 On Vault in the first rotation, Mc Kayla MARONEY (USA) earned the top score of the Final on any apparatus. USA’s team total on Vault was nearly two points higher than the other seven finalists on this apparatus.

Russia qualified second to the Final, but their challenge faded on Balance Beam in the third rotation, where Aliya MUSTAFINA (RUS) wobbled and Victoria KOMOVA (RUS) stumbled sideways on her dismount.

Russia fell further behind USA in the last rotation on Floor Exercise, where Anastasia GRISHINA (RUS) crumbled midway through her second tumbling pass and Kseniia AFANASEVA (RUS) crashed on the last skill of her routine. Russia finished second with 178.530 points.

After an average start on Uneven Bars, defending Bronze medallist Romania gradually pulled ahead of Canada and China to place third with 176.414 points.

China, the 2008 Gold medallists, counted DENG Linlin’s (CHN) fall on balance beam, followed by HUANG Qiushuang’s (CHN) near-miss on balance beam and a fall out of bounds on Floor Exercise. They slipped to fourth place with 174.430 points.

Sixteen years after their last Team Gold in Atlanta, the United States’ women finally ended the long wait to return to the top of the Olympic Artistic Gymnastics podium on what proved a day of redemption for Jordyn Wieber.

Wieber had left North Greenwich Arena in tears on Sunday after her failure to qualify for the All-around final but the reigning World Champion responded in the manner of a true champion – setting the tone with a superb opening Vault as the American built on their success in qualifying first.

“I was pretty disappointed but I knew that I had to really pull it together mentally for this team,” said Wieber. “Getting this Gold medal was also a goal of mine so I really had to pull myself together and be strong in this competition for the team.

“I knew it was an important job to be first on Vault, I really had to start off the team on a good note,” she added. “I am happy I ended up sticking that Vault and I think that kick-started the whole competition.”

Wieber’s coach John Geddert described USA’s success as “a little redemption” for his charge but there were other heroes in a North Greenwich Arena awash with Stars and Stripes flags. McKayla Maroney had, in Wieber’s words, delivered the “pep talk” that helped lift her spirits after Sunday and Maroney’s next contribution was to score 16.233 with her own Vault, ensuring a combined total of 48.132 as the Americans went in front from the first rotation.

Arguably the biggest contribution overall, though, came from Gabby Douglas who scored a combined 61.4654 on the four apparatuses. “I’m so proud of these girls. I knew we had it,” said the effervescent 16-year-old.

The USA’s celebrations contrasted with the tears of China, the deposed champions who finished outside the medals in fourth place, behind Russia and Romania. Although the Chinese opened with an unmatched Uneven Bars score of 46.399, they struggled thereafter. Sui Lu said afterwards that they had looked “nervous” on the Beam in the second rotation and again on Floor in their last – where they produced the second-worst combined score (40.833), with Huang Qiushang earning only 12.500.

“The crowd was great but we maybe didn’t handle the occasion well,” said Sui. Yao Jinnan’s fitness was another factor according to Deng Linlin, who said: “”Because of Yao Jinnan’s injury, she didn’t perform very well but she tried her best.”

There were mixed emotions, meanwhile, for Silver medallists Russia whose hopes of Gold evaporated with some significant mistakes on Floor in the final rotation that left them 5.066 points adrift of USA. Anastasia Grishina was in tears after an error-strewn routine yielded a score of 12.466 while Kseniia Afanseva fell at the finish of her routine. “We have to fight to the very end, this is the most important thing I learned today,” said Aliya Mustafina, whose total score of 60.266 was second only to Douglas. Victoria Komova said much the same: “We have learned that situations can change very quickly; we have to go all the way.”

Elsewhere there was satisfaction in the Romania camp as they held off China to repeat their Bronze-medal placing of 2008. “How many gymnasts are there in the USA, China, Russia? We have a small group and try our best every day to do good things,” said the Romania coach, Octavian Belu.

The Romanians wobbled on Uneven Bars in the first rotation – scoring the worst total – but bounced back impressively, finishing with the second-best scores on Beam (45.249) and Floor (44.700). Larisa Iordache added: “You always want to do better, but any Olympic medal is important for a team. We are happy.”

There were also big smiles in the Canada squad after they marked their first Women’s Team Final appearance by posting a fifth-place finish – a small piece of history for Canadian Women’s Artistic Gymnastics. A delighted Dominique Pegg said: “Just coming here was a dream come true and making the final and coming fifth is unbelievable. We wanted to have the day of our lives because we knew we’d not have this opportunity again.”

As on Sunday, Beth Tweddle ended the evening with the highest score on Uneven Bars (15.833) and she praised her sixth-placed Britain team for their recovery after a poor start on Beam. “My team-mates have done me proud today. They’ve gone out there in front of a home crowd, we had a little slip on beam but other than that we’ve produced the routines and we’ve finished sixth in the world. Four years ago we didn’t even make the Team Final.” —- FIG