The Flame Lighting Ceremony will take place in Ancient Olympia, home of the ancient Games in Greece, on 12 March 2020. 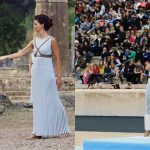 At the ancient Temple of Hera, a modern High Priestess will ignite the Olympic flame in the traditional way by using the rays of the sun and a parabolic mirror.

The Greek leg of the Torch Relay will then run for 8 days in Greece until 19 March 2020/Olympic Flame Lighting.

Following this, the ceremony to hand over the flame to Tokyo 2020 representatives will be held at the Panathenaic Stadium in Athens on 19 March 2020.

The flame will then make its way to Japan, arriving on 20 March 2020, and will be displayed for six days in Miyagi prefecture, Iwate prefecture and Fukushima prefecture in that order, commemorating the earthquake and tsunami that struck the Tohoku region in March 2011.

The Olympic Torch Relay will commence on 26 March under the theme of “Hope Lights Our Way”, taking in all of Japan’s 47 prefectures and aiming to inspire the Japanese nation to unite around messages of supporting, accepting and encouraging one another. /Olympic Flame Lighting

Tokyo 2020 President Yoshiro Mori said, “I would like to thank the IOC leadership including President Bach and John Coates for their kind understanding of our requests regarding the Tokyo 2020 Olympic Torch Relay.

Thanks to their great support, we will be able to hold a torch relay lasting 121 days, including transit days, and exhibit the Olympic Flame in the affected regions in Tohoku ahead of the grand start.

I would also like to express my sincere appreciation for the cooperation of the Hellenic Olympic Committee in reaching this decision on the schedule of the torch relay.

“The entire schedule of the Tokyo 2020 Olympic Torch Relay has now decided.

Each prefecture has established its own committee which will formulate the details of the route.

We have asked them to come up with routes that highlight the unique features of their prefectures, and to select runners who embody the spirit of the torch relay.

“I am looking forward to the arrival in Japan of the Olympic Flame, which will lite in the ancient city of Olympia in Greece.

In conjunction with all 47 prefectures across Japan, we will continue to prepare for what we believe will be a great Olympic Torch Relay.”

“The lighting of the Olympic flame in Ancient Olympia is a moment of great significance for all of us that love the Olympic Games.

It not only signals to the world that the next edition of the Games is nearly upon us but it is also the start of a journey that sees the flame light up its historical homeland and the host nation.

The Tokyo 2020 Olympic Torch Relay lighting will have a special significance in 2020, as we enter the tenth year since the 2011 earthquake and tsunami so badly affected the Tohoku area of Japan.

We thank the Hellenic Olympic Committee for their support in organising the lighting during this period.”

He continued, “At the IOC, we fully support Tokyo 2020’s initiative to display the flame in the affected Prefectures when it arrives in Japan/Olympic Flame Lighting.

We hope that this symbolic act will underline the Olympic Movement’s support for the citizens of these regions, as well as allowing them to show the watching world the progress that they have made in rebuilding their lives and inspiring the local children through the Olympic values.

The Olympic Torch Relay will then carry the flame around all of Japan’s prefectures bringing the Olympics and its values to the entire country.

We very much look forward to seeing Japan embrace this once in a generation opportunity.”

This event will actually signal the beginning of the Olympic Games and it will stage in their cradle, Ancient Olympia, the starting point of the Flame’s long and surely breathtaking, journey to the Far East.

The HOC will make sure that the Olympic Flame will reach as many places as possible within our country so that its glamour and warmth illuminates people all over Greece.

The Greek people looks forward to welcoming you in Greece in March 2020/Olympic Flame Lighting.”

26 March-24 July Japanese leg of the Tokyo 2020 Olympic Torch Relay starts from Fukushima, taking in all 47 prefectures of Japan *All dates are in local time. —- tokyo2020