Home  »  OLYMPIC   »   Manoj Kumar into next round after win 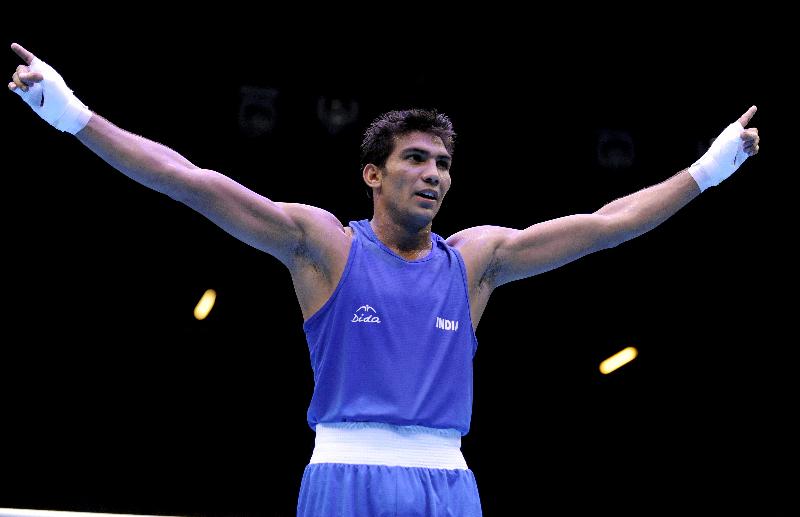 London, Great Britain, August 01, 2012: Manoj, Boxing continued with the evening session at the ExCeL arena on day four of the London 2012 Olympic Games as the remaining eleven Men’s Light Fly (46-49kg) and Light Welterweight (64kg) bouts went ahead. The capacity crowd was once again treated to a pugilistic feast.

First up in the Light Flyweights (46-49kg) was the fledgling star from Puerto Rico Jantony Ortiz Marcano versus the 19-year-old Ghanaian Tetteh Sulemanu. These two put on a good show with Ortiz Marcano, who won the AIBA American Olympic Qualifying Event Rio de Janeiro 2012, setting the early tempo and scoring a lot of points with some well placed shots. The young orthodox Puerto Rican confirmed his growing reputation with a performance full of verve to notch up a 20:6 win. He will now test himself against one of the best in the business, David Ayrapetyan from Russia.

The 18-year-old Ortiz Marcano was all smiles after the bout, declaring, “It was absolutely amazing. The work my coaches did in getting me ready for this fight was fantastic, it is thanks to them I won. I also dedicated this victory to my family”. On facing Ayrapetyan, he said, “He is a big name but I am confident in my ability, I have been working extra hard to ensure I am ready for anyone”.

Then experienced 23-year-old Ferhat Pehivan from Turkey, a veteran of three AIBA World Boxing Championships, came through his test against the American-born Trinidadian Carlos Suarez. The Turkish southpaw had a game plan, to keep his defences up high and look to counterpunch the exuberant Suarez. The tactic worked perfectly as he caught the onrushing 18-year-old with some well crafted combinations to take the first two rounds. Suarez was however the real showman in the ring, playing to the crowd, grimacing and enjoying his Olympic experience as much as possible even though he was comfortably defeated 16:6 by the better boxer.

An intriguing contest ensued between Spanish 25-year-old Jose de la Nieve Linares and the diminutive Carlos Quipo Pilataxi from Ecuador, 22. It was the younger of the two orthodox fighters who claimed the first round after finding his target with some hard penetrating rights. Quipo Pilataxi was looking more and more confident and his deceptively hard punches were both hurting the Spaniard and wearing him down. The spectators were enjoying this and were chanting, “Ecuador, Ecuador” for much of the third round as he went on to power to a deserved 14:11 win.

There was a huge contingent of Thai fans in the arena out to support veteran 32-year-old multiple-Southeast Asian Games Kaeo Pongprayoon in his bout against the winner of the AIBA African Olympic Qualifying Event Casablanca 2012, Mohamed Flissi of Algeria. It started off at breath-neck speed with Pongprayoon quickly looking to move inside and Flissi trying to use his height and reach advantage as a lot of punches were being thrown. The experienced Thai used a far greater repertoire of shots in the second and third rounds and caught Flissi with several hard overhead rights to progress with a well-taken 19:11 victory. Quipo Pilataxi now awaits Pongprayoon in the next preliminary round.

27-year-old Bulgarian Aleksandar Aleksandrov faced international level newcomer Juliano Fernando Gento Maquina from Mozambique in what was one-sided contest. Aleksandrov started well, calmly moving towards his opponent with the jab before throwing some neat one-twos to take the first round. Maquina tried to up his game and even though the southpaw was positive, he walked into a couple of hard shots, which one in particular hurt him as he took a standing eight count from the referee. The Bulgarian orthodox fighter went on to win convincingly 22:7 and will now challenge second seed Jonghun Shin of Korea for a spot in the quarter-finals.

The bouts were coming thick and fast as the Light Flyweights (46-49kg) gave way to the Light Welterweights (64kg) with Turkmenistan’s Serdar Hudayberdiyev and Manoj Kumar from India then taking centre stage. The tall Turkmen orthodox, a veteran of three AIBA World Boxing Championships, was having some joy with the jab in the first as both boxers shared the points in the round. Kumar, the 2012 Commonwealth Games gold medallist, came back strong in the second however, throwing some big punches that stunned Hudayberdiyev. The Indian had huge support from the crowd and upped his level once again to take the third and inflict a 13:7 defeat on his rival. Kumar faces one of the big medal contenders next, Great Britain’s Thomas Stalker.

2012 African Cup of Nations winner Louis Richarno Colin of Mauritius was hugely impressive in the first two rounds of his battle with the 24-year-old Moroccan Abdelhak Aatakni, moving well and unleashing a succession of precise body shots to his opponent’s kidneys. Fighting at close quarters in the third, Colin’s superior shot-making was cheered on by a huge section of the packed arena, his uppercuts piercing Aatakni’s defences repeatedly as he went on to win 16:10.

When asked about his performance Colin was keen to share his views, “It was a tough, I got drawn in to fight at close quarters and I normally like to keep my distance. Having trained in Cardiff with the Road to London program, I was ready to and able to change my style”.

Munkh-Erdene Uranchimeg from Mongolia was not in short supply of fans with a huge number of his countrymen in the crowd supporting him and it spurred the southpaw as he dominated the 22-year-old Zdenek Chladek, a 2008 AIBA Youth World Boxing Championships bronze medallist. The 30-year-old from the capital city Ulanbaatar had too much about him for his rival, hurting the Czech Republic man with some hard combinations in their contest. There was a swagger about Uranchimeg as he fainted and weaved his way through three impressive rounds to record a 20:12 victory. The Mongol now meets Colin in the second stage of the competition.

Quality orthodox fighter Jeffrey Horn has been in fine form since taking the AIBA Oceania Olympic Qualifying Event gold medal in Canberra in March and proved his worth with a polished performance against Zambia’s Gilbert Choombe. The 24-year-old Australian boxed clever, using his jab to good effect before throwing some good one-twos to take a five point lead after the first round. Choombe put up a much better resistance in the second, but in the final round Horn worked his rivals body well before pouncing with a couple of excellent shots as he prevailed in style 19:5.

Azerbaijan’s stocky 21-year-old Gaybatulla Gadzhialiyev began brightly in his contest versus Abderrazak Houya, connecting with some vicious right hooks to take the first round. He continued to set the pace in the second, throwing some clean shots, but after getting caught by a hard left from his opponent, he began to sag and Houya came back to draw that one. The 25-year-old Tunisian’s corner were extremely animated in between rounds and when the third got underway, their boxer was straight out of the blocks, pummelling Gadzhialiyev with an array of exquisite punches that saw him claw his way back and claim a thunderous third round to take a 19:11 victory.

Houya’s coach declared after the bout, “We knew he could do it, he is in great shape and has been working extremely hard. We told him to go for it, that he had nothing to lose and he has made us and his country proud. Now we are aiming for the quarter-finals”.

In the final bout of the day, the quick feet of Anthony Yigit made the difference against Francisco Vargas Ramirez of Puerto Rico in the opening rounds as the Swedish southpaw got the better of his taller opponent by landing some good body shots. Vargas Ramirez began using his jab more in the second but a slick Yigit moved up a gear in the final round to secure his progress by winning 13:9. The 20-year-old Swede must now face the tough second seed from Ukraine Denys Berinchyk.

The much anticipated Heavy (91kg) and Super Heavyweight (+91kg) categories get underway tomorrow along with the second preliminaries of the Bantamweight (56kg) with some huge names taking to the ring. It promises to be a spectacular day of action. —- AIBA/Photo: AIBA/Caroline Quinn