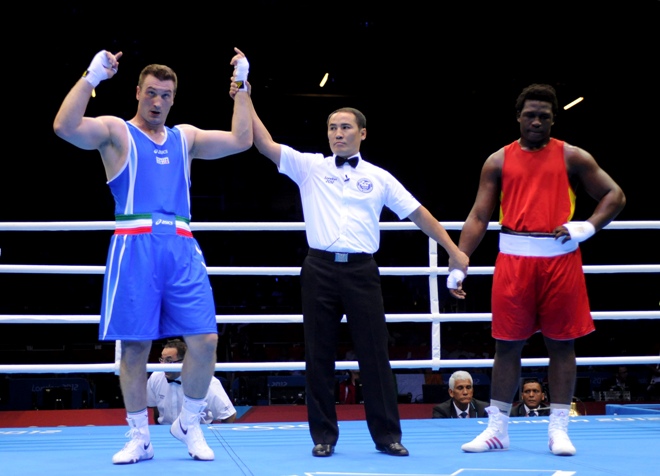 An absolute firecracker got the action underway in the second round of preliminaries in the Bantamweight (56kg) category as top seed and reigning AIBA World Champion Lazaro Alvarez Estrada from Cuba faced teenage American prodigy Joseph Diaz Jr. The Cuban’s superior technique was a joy to watch as he edged the high scoring first round by a single point, but the endeavour of the US southpaw could not be faulted as he continued to move forward in the second round. Even though he connected with a couple of sweet lefts, Diaz Jr was leaving himself open to the counterpunch, which suited the style of the 21-year-old Alvarez, who took the final two rounds to win 21:15 and confirm his status as the title favourite. There was huge respect between the two boxers after the bout with Alvarez embracing the hugely talented American who has a real bright future ahead of him.

Next up and trying to book their place for the quarter-finals were Russia’s 23-year-old 2009 AIBA World Boxing Championships silver medallist Sergey Vodopiyanov and the exciting Brazilian southpaw, 2011 World Military Games winner Robenilson Vieira de Jesus. It was a real clash of styles with the powerful Russian orthodox’s classic approach against the dancing feet of the elusive Vieira de Jesus. The movement and speed of the 23-year-old from Brazil had the crowd in awe as he weaved his way around the ring, scoring vital points on the counter in the first two rounds. Vodopiyanov tried hard to get to grips with his opponent, hounding him down in the third but to no avail as he failed to impose himself and overturn his deficit and as a result suffered a 13:11 defeat. The Brazilian now faces Lazaro Alvarez Estrada in the quarter-finals.

In the third bout of the day, it was an all-World Series of Boxing (WSB) affair between two of the Bantamweight (56kg) category’s top boxers as Irish record-breaker John Joe Nevin battled 2011 WSB Individual Champion Kanat Abutalipov of Kazakhstan for a place in the last eight. Both fighters have speed and agility in abundance but it was the calculating Nevin who took the first round with some well placed shots. There was more slick movement from the Irish 22-year-old who was using his height and reach advantage to frustrate the onrushing Abutalipov, throwing good jabs and countering with some solid left hooks. It was a classy performance from Nevin, his clever game plan impressive as he cruised to a confidence boosting 15:10 victory as the crowd rose to its feet in applause.

“I am taking every fight as it comes. I am feeling relaxed and up to the challenge, I would not be here if I did not think I could go all the way”, declared the Irishman. On life in the Olympic Park, he said, “I am enjoying the experience, I met Ryan Giggs but I am hoping to meet the Williams sisters”.

Proving just how competitive this draw is, Mexican teenager Oscar Valdez Fierro created the sensation of the tournament so far by knocking out the fourth seed and world top ranked Bantamweight (56kg) Anvar Yunusov of Tajikistan. In typical Mexican style, Valdez Fierro went all out and attacked the experienced 25-year-old Tajik, throwing punch after punch to great effect as he stormed into an early lead. Buoyed by his performance, the 21-year-old continued to apply the pressure, to which Yunusov had no response. Valdez Fierro was completely dominant and moved into the quarter-finals after this magnificent 13:7 victory.

The Heavyweights (91kg) then made their big entrance to the competition with first up the showdown between hard-hitting American Michael Hunter II and European Champion Artur Beterbiev of Russia. The 22-year-old orthodox US fighter looked really positive in the first using the jab well before throwing several vicious right hands to take a narrow lead. An even second saw both fighters exchange heavy blows but Hunter managed to maintain his slender single point advantage coming into the final round. The third saw the boxers slug it out in the middle of the ring with the American getting a bloody nose for his troubles. It was the experience and lucidity of Beterbiev that made the difference in the closing stages with some carefully crafted uppercuts as he was awarded the win on count-back after the scores were drawn 10:10. The experienced Russian will now battle Ukrainian top seed and the reigning AIBA World Champion Oleksandr Usyk for a place in the semi-finals.

Two-time European Championships silver medallist Tervel Pulev from Bulgaria, winner of the recent AIBA European Olympic Qualifying Event Trabzon 2012, had too much for 22-year-old Chinese southpaw Xuanxuan Wang in their contest, sending him to the canvas with a hard right in the first and then again with a carbon copy of that shot in the second. From then on it was damage limitation from Wang, who was aiming to frustrate his opponent, and unfortunately it did not make for an entertaining fight but Pulev did enough to see himself through to the quarter-finals with a 10:7 win.

The tall 21-year-old Yamil Peralta Jara from Argentina looked classy against the experienced Algerian WSB star Chouaib Bouloudinats. The Panamerican Games bronze medallist looked hungry from the first bell, using his height and throwing some ferocious one-two combinations to completely dominate his rival. Orthodox Peralta Jara was faster and more alert than his fourth seeded opponent and there were huge cheers from the crowd when midway through the second he landed a succession of hard rights flush on the jaw that sent Bouloudinats to the canvas. The Algerian was running out of ideas on how to deal with the power of his opposition and suffered a 13:5 defeat. The Argentinean will now face the mighty Pulev in the next stage of the competition.

The packed crowd at the ExCeL cheered loudly as the Super Heavyweights (91+kg) made their way into the ring with top seed and reigning AIBA World Champion Magomedrasul Medzhidov from Azerbaijan opening up proceedings against Congo’s Meji Mwanba. The action began with immediately one of the 25-year-old Azeri’s trademark overhead rights landing hard on his opponents face with Mwanba already having to take a standing eight count in the first. Medzhidov stepped it up a gear in the second and was starting to connect with more and more ferocious punches and after giving the Congolese a bloody nose and sending his headguard flying with a powerful right, the referee stepped in to stop the contest.

Dominic Breazeale from the United States of America then faced rising Russian star and European Champion Magomed Omarov in a real clash of titans. Deceptively fast and nimble, Omarov applied the pressure right from the off, connecting with a flurry of punches early on with the American having to take a standing eight count, then hurting Breazeale again with a hard left to the body as he claimed the first round in style. In the second, Omarov was unrelenting, landing some precise punches, with an overhead right in particular hurting the American. Breazeale gave a good account in himself in the third but was caught again by a hard left as the Russian confirmed his dominance to win with authority 19:8. Omarov versus Medzhidov will now be one to relish.

A gripping all-African contest followed with Morocco’s Mohammed Arjaoui putting on a good show against the enthusiastic orthodox Cameroonian Blaise Yepmou Mendouo. The Moroccan dominated each round with tight defences, the clever use of the jab and quick counterpunches to record a solid 15:6 victory.

Defending Olympic Champion, 32-year-old Roberto Cammarelle from Italy came up against the rising star from Ecuador Ytalo Perea Castillo in the last bout of the afternoon session. In the face of the redoubtable Italian, the teenager was keeping his defences tight, looking to land that killer punch but Cammarelle, a two-time AIBA World Champion, was just too good for him. The Italian’s superior technique saw him dominate the first round. The young pretender, undaunted, was still trying to find that big breakthrough by landing a heavy counterpunch but Cammarelle showed his class, varying his approach to cruise to 18:10 victory. The Italian fourth seed now faces Mohammed Arjaoui.

When asked if he had felt the pressure of being defending champion, Cammarelle replied, “I have not been thinking about that, I just concentrated on the bout. I did not expect such resistance from Perea Castillo but I am happy with the manner of the victory”.

The evening session will see the Bantam (56kg), Heavy (91kg) and Super Heavyweights (91+kg) once again. With two Brits amongst the boxers on show, expect the atmosphere in the ExCeL arena to make the hairs on the back of your neck stand up. —- AIBA