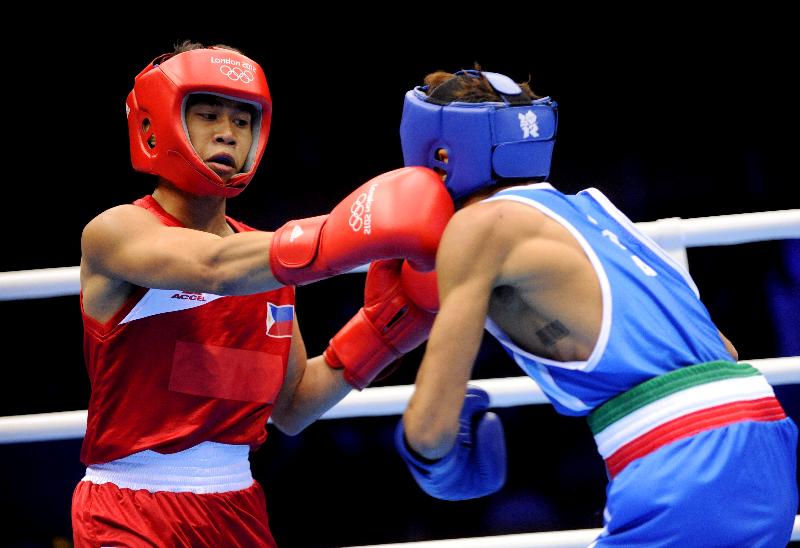 London, Great Britain, 1 August 2012 – Philippines’ new boxing sensation, two-time Sydney Jackson Memorial Tournament winner Mark Anthony Barriga is really making a name for himself after defeating world class rivals in recent months and impressing at the London 2012 Olympic Games. The Filipino Light Flyweight (46-49kg) fighter was part of the AIBA Road to London Program where he trained hard and amazed his various sparring partners with his tenacity and now he is ready to challenge the current order and bid for an Olympic medal.

His sensational victory against the promising Italian Manuel Fabrizio Cappai, has made the rest of the competition stand up and take notice of his talent. He now meets Kazakhstan’s Asian Games silver medallist Birzhan Zhakypov with a quarter-final place at stake. Cameroon’s 25-year-old African Champion Thomas Essomba was also at the three-week training camp in the Welsh capital in preparation for these Olympic Games. He delighted the crowds at the ExCeL after defeating Morocco’s African Championships silver medallist Abdelali Daraa in style.

Bayron Molina Figueroa became the first boxer from Honduras to compete at the Games since the 1996. Molina was selected by the Tripartite Commission and as result joined 43 other boxers to train in Cardiff. He unfortunately came up against India’s AIBA World Boxing Championships quarter-finalist Laishram Devendro Singh who stopped him in the first round. Ghana’s AIBA Youth World Boxing Championships competitor Sulemanu Tetteh was also with the AIBA Road to London camp but his stay in the British capital was cut short by the Puerto Rican teenage sensation Jantony Ortiz Marcano.

Another of the boxers from the AIBA Road to London Program, Carlos Antonio Suarez entertained the crowd with his showmanship but the teenager from Trinidad & Tobago lacked the international experience of his rival and was on the losing side against Turkey’s European Championships bronze medallist Ferhat Pehlivan.

Mozambique’s first boxer at the Olympic Games since 1996, Juliano Fernando Gento Maquina, showed potential against Bulgaria’s veteran Strandja Tournament winner Aleksandar Aleksandrov but was unfortunately also defeated. AIBA Road to London Program member Cesar Andres Villarraga Aldana from Colombia was unlucky to be drawn against Cuba’s former AIBA World Champion Roniel Iglesias Sotolongo and even though he lost, the manner in which he continually tried to move forward pleased the packed ExCeL arena.

Turkmenistan’s Asian Champion Serdar Hudayberdiyev put the AIBA Road to London I in the spotlight after taking silver at the AIBA Asian Olympic Qualifying Event Astana 2012 and after booking his quota place for the Olympic Games was once again invited to train in Cardiff. He began well against India’s Commonwealth Games winner Manoj Kumar but his savvy opponent cranked up the pressure in the latter stages and Hudayberdiyev was eliminated.

All Africa Games winner Louis Richarno Colin of Mauritius impressed at the AIBA Road to London training camp before these Olympic Games and was sensational as he dispatched Abdelhak Aatakni, who claimed gold at the AIBA African Olympic Qualifying Event Casablanca 2012, to move into the second round of preliminaries of the tournament. The Mauritian boxer was in fine form and won 16:10.

The Czech Republic’s AIBA Youth World Boxing Championships bronze medallist Zdenek Chladek realised his Olympic dream by qualifying for London. The 22-year-old faced Mongolia’s AIBA World Boxing Championships bronze medallist veteran Uranchimeg Munkherdene in the opening round and despite of his great efforts the Asian fighter defeated him in a close contest.

Zambia’s Gilbert Choombe caused a huge surprise when qualifying for these Olympic and his Federation was delighted for him to be invited to the Welsh capital to train. In London he came up against an inspired opponent in Australia’s Jeffrey Horn, who was too strong for him in their first preliminary round contest. Choombe proved that Zambian boxing is now heading in the right direction. —- AIBA