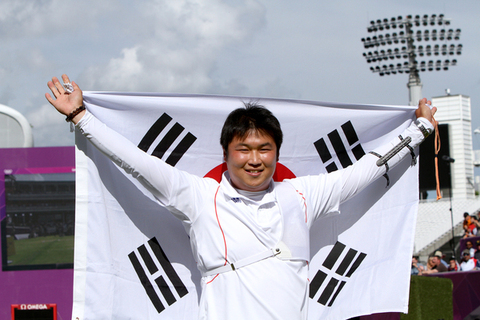 London – GBR, August 03, 2012: OH Jin Hyek ended Korea’s wait for a men’s individual Olympic title with a stunning display to defeat Japan’s Takaharu FURUKAWA 7-1 in the final at Lord’s on Friday. DAI Xiaoxiang (CHN) won the bronze medal after a victory over Rick VAN DER VEN (NED) in a shoot-off.

Despite being the sport’s dominant nation for well over 20 years, the men’s gold had so far eluded Korea, whose prospects took a blow earlier in the day when top seed and hot favourite IM Dong Hyun was knocked out.

A third from the nation, 2nd seed KIM Bubmin, also bowed out before the medal matches as he was defeated 6-5 by China’s DAI, but OH shot nervelessly to ensure a third gold from a possible four for his country at London 2012. FURUKAWA took silver and DAI bronze, his country’s first individual men’s medal, after seeing off Holland’s VAN DER VEN in yet another shoot-off. 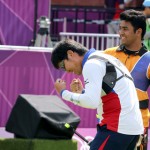 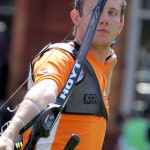 VAN DER VEN, looking to replicate his coach Wietse VAN ALTEN, who finished 3rd in Sydney 12 years ago, produced the upset of the day to take out IM in the last 16. The world No. 20 also beat KUO Cheng-Wei (TPE) 6-0 in the quarterfinal with a performance which included seven successive 10s.

The Dutch man then lost a shoot-off to FURUKAWA in the semifinal but was still delighted with his performance. He was only selected by Netherlands because he won the European Championships even though another archer, Rick VAN DEN OEVER (NED), earned the Olympic place.

VAN DER VEN was edged off the podium when DAI settled their match with a dead-centre 10 in the one-arrow decider to earn China its first individual medal in men’s archery.

Viktor RUBAN (UKR) could not keep up his return to form and went out 7-1 to OH in the quarterfinal. Since winning the gold medal in Beijing 2008, RUBAN has not enjoyed the best of times. Even on ranking round day at Lord’s on Friday, he only finished 43rd but improved every day. Earlier in the day, RUBAN beat No. 6 seed Gael PREVOST (FRA) in the 1/8 elimination but found OH too tough an opponent.

Taylor WORTH (AUS), conqueror of world No. 1 Brady ELLISON (USA) in the 1/16 elimination, could not repeat the feat as he lost a shoot-off against No. 7 seed DAI in the 1/8 elimination. Another outsider, 15-year old Dan OLARU (MDA), found Korean KIM a challenge too far in the 1/8 elimination having earlier claimed victories against Jake KAMINSKI (USA) and Simon TERRY (GBR).

Friday afternoon’s matches put an end to the archery competition at the London 2012 Olympic Games. Korea finishes 1st of the medal ranking with three gold and one bronze, while Italy comes 2nd with one Olympic title. China, Japan and Mexico are tied at 3rd place with one silver and one bronze each, USA finishing 6th with one silver medal.

Read the review of all men’s individual matches from the quarterfinals to the gold final.

MOHAMAD killed off the home country’s last hope for a medal in the morning after he beat No. 4 Larry GODFREY (GBR) in a tie-break. He will try to clinch the first ever Olympic medal in archery for Malaysia. MOHAMAD let the first set go 26-27 shooting a 7 at his third arrow. He trailed 0-2. The archer from Malaysia had another bad shot in the following set, a 6 at his second arrow, and lost again by one point, 24-25, to trail 0-4.

Netherlands’ VAN DER VEN sprung a huge surprise in the morning, ousting top seed and world record holder IM Dong Hyun (KOR) in the last 16. After breaking the 72-arrow world record in last week’s ranking round, IM was installed as a red-hot favourite. Instead, he fell well below his own high standards and saw European champion VAN DER VEN shoot superbly for a 7-1 success.

The Dutch man opened the match with a 7, but he came round with two 10s to clinch the first set 27-24 and lead 2-0. As VAN DER VEN kept going with a perfect second set (30 points), his opponent from Chinese Taipei could only bow with 27 and trail 0-4. Two other brilliant shots for seven 10s in a row in this match, and VAN DER VEN outshined his opponent, winning the set 29-28 and his quarterfinal 6-0!

OH put in one of the morning’s standout performances, claiming a straight sets victory over Poland’s Rafal DOBROWOLSKI. Reigning Olympic champion Viktor RUBAN (UKR), whose standing has fallen since Beijing, also remains in contention to retain his title. The Ukrainian defeated France’s Gael PREVOST 6-4 in 1/8 elimination.

The Korean started brilliantly with two 10s and a 9. He overcame his opponent’s 25 points to take the lead 2-0. As each archer scored 27 points in the second set, the gap remained in favour of OH, who stayed ahead 3-1. OH drove it to a match point at 5-1 when he won the third set 29-27. There will be a new Olympic champion, since the Korean sent the former home, winning the fourth set 28-24 and the match 7-1!

KIM joined his teammate OH Jin Hyek in the quarterfinals with a 7-1 win over 15-year old Moldovan Dan OLARU. The latter had accounted for the highly-rated Jake KAMINKSI (USA) and former Olympic bronze medallist Simon TERRY (GBR) on Wednesday but fell short against the 2nd seed. Stunning start the China’s DAI against KIM, who opened the match with three perfect shots and took the lead 2-0.The two athletes shot exactly the same three arrows in the second set, 10-9-9, and the advantage remained in favour of the Chinese, 3-1.

KIM then scored one point better than his opponent in the third set, 27-26, to come back at 3-3. The Korean won the set by one point for the second time in a row, this time 29-28, to take the lead for the first time of the game, 5-3. Whereas KIM scored a triple 9 in the final set, DAI came up with one 10 and two 9s to tie the match at 5-5 and drive his opponent to a shoot-off. KIM’s arrow was a 9 but low close to the 9 line. Therefore, DAI needed to shoot a better 9 at least to clinch victory. He did it for another upset for the day!

The Dutchman, who upset the No. 1 seed IM Dong Hyun (KOR) in the 1/8e elimination round in the morning, is facing another higher rank archer to ensure an Olympic medal. The Japanese for his part defeated the 2008 Olympic champion Viktor RUBAN (UKR) for a semifinal berth.

The first set was tied 28-28 and the two archers shared the set points at stake, 1-1. VAN DER VEN then had a brilliant second set with three perfect shots to take the lead 3-1. FURUKAWA took advantage of an 8 by his opponent, winning the third set 29-27, and the Japanese tied the match at 3-3.

The Dutch contender recorded his second perfect series in the fourth set to recover his lead 5-3, with a 30-28 set. VAN DER VEN had a second 8 for the match in the final set and let his opponent come back 5-5 for a 1-arrow shoot-off. Shooting first, FURUKAWA put pressure on his opponent with a 10 in the tie-break. VAN DER VEN could not do better than a 9 and let the Olympic gold final leave away!

OH is the only Korean left on the field for an Olympic medal after his teammates IM Dong Hyun and KIM Bubmin were defeated in 1/8 elimination and quarterfinal respectively. The Korean started the match with two perfect shots but followed with a 7. His opponent made the most of it and won the first set with a 9 and two 10s (2-0). OH scored again two 10s in the second set together with an 8. This time, 28 points were enough to clinch the two set points (27 for DAI) and draw at 2-2. The two competitors scored three 9s each in the third set and the tie remained (3-3).

DAI took the lead for the second time of the match (5-3) thanks to a 28-point set against 26 for his contender. But he was forced to a shoot-off however, losing the final set 27-29 (5-5). Shooting first, OH’s shot was a 9 on the left but quite close to the 10-ring. DAI’s arrow veered also to the left but further away and he lost the match. It is the Korean who will shoot for the Olympic title against Japan’s Takaharu FURUKAWA.

The Dutchman will try to do as well as his coach Wietse VAN ALTEN who won the bronze medal at the Sydney 2000 Olympic Games. The Chinese is in the hunt for the first men’s individual Olympic medal for his country. The best start was for VAN DER VEN, who recorded three perfect shots and took the lead 2-0. He then repeated with three arrows in the gold (9-10-10) and was only two set points away from the medal (4-0). In the third set, a 10 at his third arrow would have clinched victory, but the archer from the Netherlands released an 8 and lost the set 27-28. The Chinese came back at 2-4. VAN DER VEN had the two next arrows out of the gold (8 and 7). He lost another set, 25-28, and saw his opponent come back, 4-4.

Tension was huge on the athletes! DAI scored 8-10-9. With 8 and 9, VAN DER VEN could win with a perfect shot… He recorded a 9 and the match was a draw again for another shoot-off!

The Chinese could not have done better in the tie-break with a 10 very close to the centre. Nothing to do for his opponent, who ended his Olympic dream with an 8… Victory and first individual medal in men’s archery for China!

Both Japan and Korea are looking for their men’s individual Olympic title. FURUKAWA can even offer his country its first ever gold medal in archery. OH made a big step forward shooting two times 9-10-10 in the first two sets and lead 4-0. He then repeated with another 29 points in the third set, but this time his opponent also recorded 29 to tie the set. The Korean was only one set point away from victory however, leading 5-1.

Too much pressure for FURUKAWA who went out of the gold rind two times in the fourth set (two 8s) and scored only 25 points. His opponent did not miss this chance, and clinched Korea’s first men’s individual Olympic title with 28 points (7-1). —- World Archery