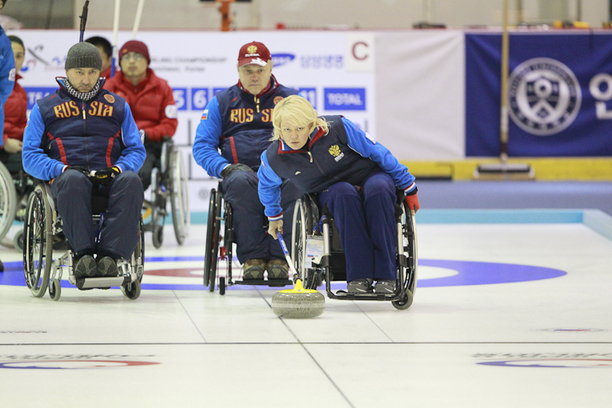 Oksana Slesarenko, captain of Russia’s Wheelchair Curling team, has been voted the International Paralympic Committee (IPC) Athlete of the Month for February after leading her squad to the 2012 World Championship title in Chuncheon, Korea.

In honour of International Women’s Day on 8 March, all of the finalists for the award were women. Slesarnko paid tribute to her mother and daughter on the day, who she says have been her biggest inspiration throughout her career.

“My mother put her heart and soul into me, and my daughter has supported me during my entire sport career,” she said.

Not only did Slesarenko help Russia win gold, but she led the squad to its first-ever Wheelchair Curling medal on the international stage – all after an unfortunate series of events.

Russian coach Vladimir Shevchenko passed away during the Championships.

“We are very happy that in such a hard struggle we won,” Slesarenko said. “It took us nine years to have this victory. And finally, thanks to the unity of our team, will power and great aspiration, we have become the best.”

The win was quite bittersweet for the entire Russian delegation.

“This victory is dedicated to him – the coach who put his efforts, experience and patience into our success,” Slesarenko said. “We were feeling his support during the Championships.”

The Russians won nine of their 12 contests in total at the Championships, easily defeating the Koreans, 9-1, in the finals on their home ice in Chuncheon.

“We have reached just the first goal,” Slesarenko said. “The next one is Paralympic Games in Sochi. We will strive to win and make a fierce effort to defend our world-champion title.”