Came Rio 2016 and also Phelps, for six more medals (including five victories), for an accumulated 28 medal-tally (among them 23 Olympic titles)! The last (are we sure?) triumph of the best athlete ever happened in the last session of the Swimming finals at the Rio Aquatics Stadium, with the gold of the US 4x100m medley relay in a new Olympic record of 3:27.95.

The previous best was also from the North Americans and was set in Beijing 2008. Phelps swam the butterfly leg and was decisive in the final victory, as Adam Peaty had brought Great Britain to the first place after the breaststroke leg.
Phelps leaves Rio (and the pools?) with six medals, distributed as follows: gold in the 200m fly, 200m IM, 4x100m free, 4x200m free, 4x100m medley, and silver in the 100m fly.

No other athlete in the Olympic history has a comparable record: besides the total number of 28 medals, Phelps is obviously the only competitor to ever win at least six medals in four consecutive editions of the Games. Moreover, in Beijing 2008, he was the first athlete ever to earn eight gold medals in a single Olympics! Superlatives are not enough for the man who has brought Swimming to another dimension in the last 12 years!

In the first final of the night, the 2012 Olympic champion Ranomi Kromowidjojo and the 2015 world gold medallist Bronte Campbell were naturally the stars to watch, but a totally different outcome consecrated Pernille Blume (DEN) as the winner in Rio, in a time of 24.07. Simone Manuel (USA), already Olympic champion in the 100m earned silver in 24.09, while Aliaksandra Herasimenia (BLR) took bronze in 24.11. 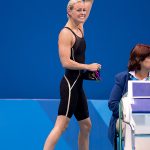 The champion from Belarus had already been in the podium four years ago in London, where she was second.

The Australian Campbell sisters did not reach the podium, with Cate (2013 world vice-champion) finishing in fifth (24.15) and Bronte concluding in seventh (24.42). Kromowidjojo (NED), who medalled in the last three editions of the FINA World Championships was only sixth, in 24.19.

In the men’s 1500m free, Italy’s Gregorio Paltrinieri did a solitary race, but had a very painful last 100m did not allow him to improve the World Record, established by 2012 Olympic champion Sun Yang (CHN) in 14:31.02. Paltrinieri, also the 2015 world champion in Kazan, swam always under the WR pace, but had to content with the gold in 14:34.57. He was however clearly better than the rest of the field, with US Connor Jaeger getting the silver in 14:39.49 and the second Italian of the final, Gabriele Detti, earning bronze in 14:40.86.

Paltrinieri had been fifth of the 2012 final, and also silver medallist at the 2013 Worlds, while Jaeger was also second in Russia last year. Jordan Wilimovsky (USA), 10km world champion last summer and participating in the marathon swimming of these Games next Tuesday, finished fourth, while Ryan Cochrane (CAN), in the podium of the last four World Championships and silver medallist in London 2012 was sixth in 14:49.61.

In the penultimate event of the swimming programme, the USA displayed once more their power, getting one more gold medal in 3:53.13 and revalidating the Olympic title from London 2012. The Australians (silver medallists in Kazan 2015) got the silver in 3:55.00, while an inspired Danish relay (with Pernille Blume swimming the last leg) earned bronze in 3:55.01 (they were seventh four years ago). Last year’s world champions, China, didn’t get to the podium, finishing in fourth (3:55.18). —- FINA