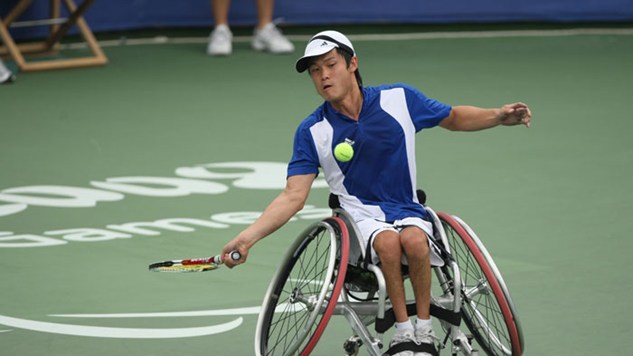 Through his Foundation, started 15 years ago, Cruyff is very much involved with several Paralympic sports, which all started with the partnership with the ITF to support and promote wheelchair tennis in developing countries.

This year the Cruyff Foundation, which has established support in over 30 countries, celebrates its 10-year partnership with the ITF. Through the ITF Silver Fund and the Junior Program, the ITF aims to establish long-lasting wheelchair tennis programmes in developing countries, providing disabled children and adults with more opportunities to enjoy an active and rewarding life.

ITF Wheelchair Tennis Manager Mark Bullock said: “We are delighted that Johan is able to join us for the Paralympic Tennis Event Draw Ceremony on Thursday at Eton Manor, as what promises to the biggest and best Paralympic Games ever starts to get underway.

“Many of the 112 players from 31 countries competing in the London 2012 Paralympc Tennis Event come from countries that have been aided by the wheelchair tennis development work enabled by the Cruyff Foundation’s partnership with the ITF over the past 10 years.

“Johan also had an influence in France’s current men’s world No. 1 Stephane Houdet taking up wheelchair tennis after meeting Stephane at a golf tournament and suggesting that he try the sport. Stephane went on to win gold in the men’s doubles at the Beijing 2008 Paralympic Games.”

Cruyff will attend Thursday’s Draw Ceremony as part of a visit to the London 2012 Paralympic Games which will also include his attendance at tonight’s Opening Ceremony.