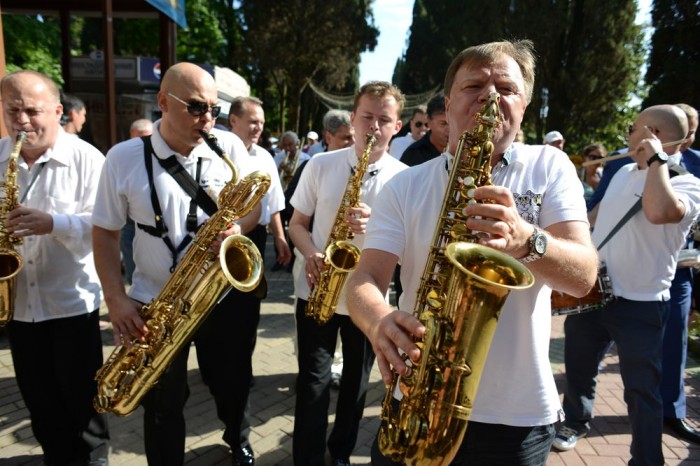 Sochi – Russia, July 11, 2012: Jazz stars, The third international “AquaJazz” Festival has been successfully hosted in Sochi as part of the Sochi 2014 Cultural Olympiad. The very best jazz musicians from Russia and the USA performed for Sochi residents and guests on the 4th and 5th July. “AquaJazz” is a true celebration of music, attracting the very best international musicians. The festival was brought to Sochi for the third time by the famous Russian jazzman Igor Butman.

“It has been an honor to be involved in Sochi’s “Aqua Jazz” festival since 2002 and I am very proud of what it has achieved. The festival brings together jazz musicians from around Russia and across the world. Thanks to the Cultural Olympiad, we have been able to organize and successfully deliver this unique musical event”.

Jazz stars, The Sochi 2014 Cultural Olympiad is a unique project by the organizers of the Games, offering the best Russian cultural events. In 2014 visitors to the Olympic host city will not only be able to enjoy the sporting events but also the cultural diversity of Russia. Events will be held at a number of staging venues located in Sochi and Krasnaya Polyana. Since 2010, the Sochi 2014 Organizing Committee, along with a number of regions throughout Russia, have been carefully selected the best in Russian culture.

This year, the Sochi 2014 Cultural Olympiad is devoted to music and the Sochi 2014 will present a number of cultural events to the public. These will include concerts and festivals showcasing the best in Russian and international musicians, competitions and master-classes.

The scale of the project will make it possible to involve everyone in a celebration of music, maintaining and increasing the cultural riches of Russia. All of the events of the Sochi 2014 Cultural Olympiad can be found on Sochi 2014’s website www.culture.sochi2014.com. —– Sochi 2014