By Tom Lloyd, Paris, France Dec 01, 2017: Following the decision in September, which saw Paris named the Olympic Host City in 2024, 100 years after they last staged the Games, Paris 2024 President Tony Estanguet has welcomed key members of the IOC, Paris 2024 founding members and other stakeholders to Paris to outline the next steps in the organisation of the Games (IOC visit marks first milestone). 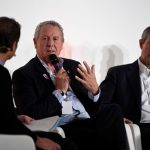 The meeting, which included Pierre-Olivier Beckers-Vieujant, Chair of the IOC Coordination Commission and Executive Director, Olympic Games, Christophe Dubi, marks a new phase in the partnership. 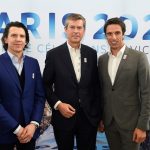 Across the two days, the orientation seminar presented the common vision and ambition of Paris 2024 and the IOC to develop a new Games model – the first aligned with Olympic Agenda 2020 – that aims to create a spectacular sporting celebration and deliver meaningful legacies for the people of Paris and France.

Paris 2024 set out its plans to form the Organising Committee (OCOG) in early 2018 with the constitution agreed and relevant statutes in place. SOLIDEO, the body charged with the delivery of infrastructure and venues for the Games, has also now been established.

The Olympic and Paralympic Law has been brought before Parliament and Paris 2024 is in the process of recruiting for key leadership positions including a CEO.

“This week’s seminar marks the first milestone in our journey towards the Games in 2024, and a new chapter in our collaboration with the IOC. Dialogue and engagement was at the centre of our success as a bid, and we want to carry this idea over into our relationship with the IOC and everything we do as an Organising Committee to demonstrate how the Games can be a catalyst for change in society.

“Paris 2024 will be the first Games to be fully aligned with Olympic Agenda 2020, and we plan to be innovative on every aspect of our project – including maximising positive legacies, developing engaging celebration sites, creating an enhanced athlete experience and ensuring sustainability best-practice.

We look forward to working closely with the IOC through an effective partnership to create great benefits for Paris, France, the global community of athletes and the Olympic Movement.”

“The IOC and Paris 2024 have already enjoyed a strong, collaborative relationship, which allowed for the realisation of innovative ideas such as the Tripartite Agreement.

In a continuation of that partnership, and in line with the objectives of Olympic Agenda 2020 and Games Management 2020, this seminar signalled the next step in ensuring Paris is fully supported on the journey to execute their Games vision and concept.”

“After winning the 2024 Games, Paris must now succeed in their organisation. This first seminar marks the beginning of a seven-year partnership, which will involve the athletes, the elected officials, the IOC and the whole of the French society.

This unity should enable us to build the most sustainable, the most inclusive and the most innovative Games possible, with the ambition of being beneficial to Paris, Parisians and the French people. The exchanges over the past two days have made me very optimistic for the future.”

“This seminar is a key moment to start the preparation of the 2024 Olympic and Paralympic Games. From today, and until 2024, we will work in partnership with the IOC to organise transparent and sustainable Games, which will leave a long-term legacy for the French people.”

“I am proud and happy that we have been able to host the orientation seminar at the CNOSF headquarters in Paris, the home of French sport, and a symbol of the legacy of the Albertville 1992 Winter Games.

“The two days of exchanges mark the beginning of a strong partnership with the IOC, which, alongside the future OCOG, will help deliver exceptional Games. The CNOSF and the entire sports movement support Tony Estanguet and his team in the success of this historic project, which will place France firmly on sport’s global stage.”

“As a moment of sharing, this seminar kicked off work between the IOC and all Paris 2024 partners to create a new Games model that aims for a spectacular celebration and a meaningful legacy for society. Our duty is to ensure that this unprecedented project, involving society in all its diversity, respects its promise, in terms of sport, economy, culture and budget.”

“The orientation seminar of the Olympic and Paralympic Games in Paris 2024 marks the beginning of a great adventure for France and for the Paralympic movement. This sequence is an opportunity for the French Paralympic Committee to ensure the organisation of these Games acts as a catalyst. Now, we must transform the ambition of Paris 2024 into concrete actions.”