By Robert Fawdon, Paris, Oct 1, 2016: The Paris 2024 Olympic and Paralympic Games Bid Committee today welcomed IOC President, Thomas Bach, to Paris as he embarked on a two day visit to the French capital. To begin the visit, President Bach was greeted by 400 athletes at France’s National Institute of Sport, Expertise and Performance (INSEP) – the country’s flagship institution for elite sport. 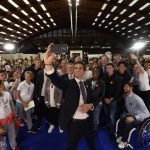 Paris 2024 Co-Chairmen Tony Estanguet and Bernard Lapasset gave President Bach a tour of the state-of-the-art sports facilities at INSEP before the IOC President delivered a speech to the athletes.

President Bach was also shown around an athlete led exhibition illustrating the INSEP programme that educates young sports people about athlete development, the challenges that come with being an elite athlete and preparation for transitioning into employment once they finish competing. The IOC President also took part in a Table-Tennis demonstration with Paris 2024 Sports Director and two-time Olympic Medallist, Jean-Phillipe Gatien (Table-Tennis);Paralympic Gold Medallist, Arnaud Assoumani (Athletics); and Volleyball player, Victoria Ravva.

Also present were Frédéric Pietruszka and Bernard Talvard, Olympic Bronze Medallists who joined President Bach on the podium when he won Gold in Team Foil Fencing in Montreal in 1976. The range of sports stars present to welcome the IOC President, from the 1976 Fencers to Rio 2016 Champions to young athletes who hope to represent France at Paris 2024, highlights the strong support for the bid across all generations of the French athlete community.

“We are delighted to welcome President Bach to Paris to show him our wonderful city, our compact Games plan, the French people’s love and passion for all Olympic sports and our vision for a thrilling celebration of sport and Olympism in Paris and across France in 2024. This is another important moment and great opportunity to learn more about how Paris 2024 can be a catalyst for the promotion and growth of the Olympic Movement.

“We are thrilled to be here at INSEP to showcase the fantastic facilities that illustrate France’s commitment to investing in sport. Sport is woven into the fabric of our community life throughout the nation with grassroots, amateur and elite sportspeople participating daily via the many hundreds of sports clubs in the city and across the country. Since 2000, France has also hosted more than 40 World or European Championships in summer Olympic sports. Sport – and especially Olympic sport – is in the DNA of Paris and France.”
Rio 2016 Silver Medallist in Fencing, Enzo Lefort, who also conducted a Fencing demonstration with President Bach at INSEP, said:
“I am delighted that 400 fellow athletes are here today at INSEP to welcome IOC President Bach – reflecting the strong support for the Paris 2024 bid among the sports community. Athletes are the heart and soul of the Olympic and Paralympic Games and this is why the bid has made them the architects of the bid – athletes know what it takes to compete at the highest level on the greatest sporting stage.

“We are very proud of the integral role played by the athlete community so far and we will continue to drive the bid forward with energy and enthusiasm as we aim to deliver an inspirational Games in 2024.”

Located in Bois de Vincennes in eastern Paris, INSEP has been training athletes and preparing them for competition since 1945. In addition to the first-class sports facilities, the institution also features medical and recovery centres and a scientific research unit that works in the fields of physiology, biomechanics, biology, psychology and sociology to help understand the human body’s performance mechanisms, and to support coaches in the development of their training programmes. Many athletes also reside and study on the INSEP campus making use of the accommodation and educational facilities.

Since 2007, INSEP has been undergoing a major renovation phase, installing modern, sophisticated facilities that are specially adapted to cater to the high performance requirements of global competition. The facility caters for all Olympic sports and 21 of the record 42 French Medallists at Rio 2016 trained at the centre.