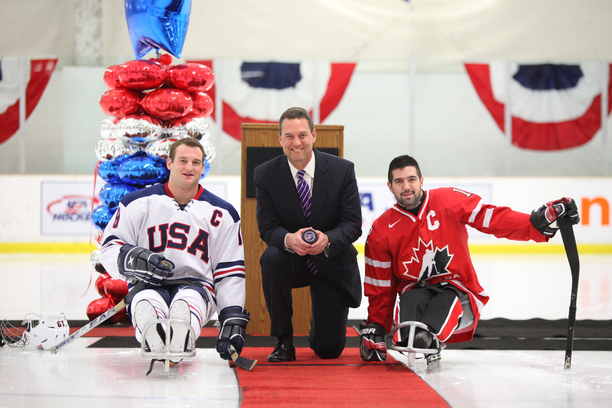 The world’s top eight teams are making their way to Hamar, Norway for the 2012 International Paralympic Committee (IPC) Ice Sledge Hockey A Pool World Championships, which begin on Saturday, running 24 March – 1 April. The Championships kick off with the Opening Ceremony at 18:00 (CET) on Saturday, and then Estonia will challenge USA in the first game at 9:00 (CET) on Sunday.

The playoff round will begin on 29 March, and the gold and bronze-medal games will take place on 1 April.

The teams will be divided into two groups for the round-robin stage and will play three games each. Group A includes: USA, Japan, Czech Republic and Estonia. Group B consists of: Norway, Canada, Italy and Korea. At the last World Championships in Ostrava, Czech Republic in 2009, USA defeated Norway for the title, and Canada picked up the bronze.

Now, as both the defending Paralympic and world champions, USA, along with Canada – which has lost just one game all season – will go into the event as the heavy hitters. Canada has won gold twice and bronze twice in five appearances at the event and will be led by captain Greg Westlake, forwards Billy Bridges and Brad Bowden and goaltender Benoit St-Amand.

First-year head coach Jeff Sauer will be at the helm for a USA team that has an average age of just 23 and will be led by forward Alexi Salamoni and defenseman and captain Taylor Chace. After the Japanese shocked the world by winning silver at the Vancouver 2010 Paralympic Winter Games, they will not be a group to look over.

“The Japanese, you can never look by them,” USA’s veteran forward Brad Emmerson said. “They’re a real quick team. They’ve got some skill on that squad, and they’ve been getting better the last couple of years. Those two teams right there, along with Canada, are the ones to watch.”

The same can be said for Italy, which pulled out some surprises to win the 2011 European Championships – just five years removed from fielding its first-ever Paralympic team.

“Canada will be our first game and Norway the second,” Italy’s Greg Leperdy said. “The same as it happened at Vancouver 2010. Let’s see if we can change the results of Vancouver.”

A Czech Republic squad that moves the puck well and a small, speedy Korea team have both come on strong the last couple of years, and Estonia will be back in the A Pool Championships for the first time since 2004. The Estonians defeated Sweden for gold at the 2009 B Pool World Championships in Eindhoven, the Netherlands.

“I think this is an excellent opportunity to prove how good we are and stay in the A Pool,” Estonia defenseman Tarmo Eerma said.

The most talked about round-robin game has been the Norway-Canada matchup at 18:00 on 28 March, for which Norwegian princess Martha Louise will be in attendance. All games will be played in Hamar’s Olympic Amphitheatre, the same venue that hosted the speed skating and figure skating competition at the Lillehammer 1994 Olympic Winter Games.

Hamar is a town of nearly 30,000 residents located along the Mjosa, Norway’s largest lake, and it is easily accessible from both Oslo and Lillehammer. Coverage and a complete schedule of the Championships can be found at www.icesledgehockeyworlds.com, and fans can follow updates of the event at www.facebook.com/icesledgehockey or www.twitter.com/paralympic.