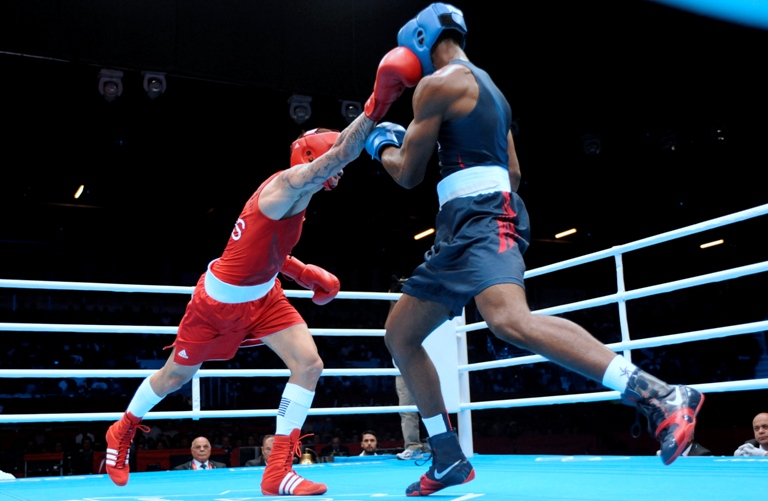 London – Great Britain, July 30, 2012: Damien Hooper, The third day of boxing at the London 2012 Olympic Games continued at the ExCeL with the first preliminary bouts of the Flyweight (52kg) and Light Heavyweight (81kg) categories in an exciting afternoon session.

In the first Flyweight (52kg) contest, Australia’s Darren Woods impressed with his cool head against 22-year-old Algerian Samir Brahimi of the World Series of Boxing Paris United Franchise. In the first round, teenager Woods looked calm and composed as his opponent did most the chasing, landing several precise shots to give himself a three point lead going into the second. Brahimi came back strong though, tightening up his defences and moving inside to good effect as he clawed his way back into the fight and overturned his deficit over the final two rounds to triumph 14:12. Brahimi now faces top seed and reigning AIBA World Champion Misha Aloian from Russian.

Orthodox Brazilian Juliao Henriques Neto, a former Panamerican Champion, used his experience against DPR Korea’s AIBA Asian Olympic Qualifying Event bronze medallist Pak Jong Chol in the day’s second bout. The North Korean fighter tried to use his height advantage but Neto’s efficient style saw the 31-year-old Brazilian Flyweight (52kg) safely into the next round of the competition with this composed 12:8 win.

Sporting a very unique haircut, Puerto Rican southpaw Jeyvier Cintron Ocasio, winner of the AIBA American Olympic Qualifying Event Rio 2012, dictated proceedings in the opening exchanges of his contest against Oteng Oteng but the 22-year-old from Botswana came back strong to ensure there was parity after the first round. This evenly matched battle continued at great pace in the second with punishing blows being traded as they ended the second once again level on points. With all to fight for, it was the 17-year-old rising star who made the difference with a couple of stinging one-twos to record a 14:12 victory over the All-Africa Games winner.

“I felt the pressure with the crowd behind my opponent, it was tough, we were throwing a lot of punches. I am just happy to have won the contest, now I can focus on my next opponent”, declared Cintron Ocasio after moving into the next round of the competition.

It was quick and unrelenting between Egypt’s Hesham Abdelaal and Kenyan Benson Njangiru as these two fighters went toe-to-toe from the first bell. The crowd were really enjoying this one as both boxers threw caution to the wind. It was evenly matched in the first but 19-year-old Abdelaal made the breakthrough in the second with a piercing straight left to edge ahead on the judges’ scorecards. The Kenyan police officer could not overturn the deficit and was defeated 19:16 by 2010 Youth Olympic Games bronze medallist Abdelaal, who now faces Uzbek fifth seed Jasurbek Latipov.

The much anticipated showdown between Mongolian superstar Tugstsogt Nyambayar and the rising star from Azerbaijan, 20-year-old Elvin Mamishzada, was a pulsating one. Both these technically proficient fighters were going for it, trading punches in the first but the young Azeri took the advantage after landing a solid right hook midway through. 2010 World University Games Champion Nyambayar then stepped up his work rate in the second and third to dominate his rival, connecting with some sublime combinations in each round to secure an emphatic 18:11 victory. Nyambayar will now meet Italy’s Vincenzo Picardi for a place in the last eight.

The Flyweights (52kg) then made way for the Light Heavyweights (81kg) as Jordan’s Ihab Almatbouli and Lukmon Lawal of Nigeria took centre stage. It was a great introduction to this category as a huge overhead and a hard right by the 26-year-old orthodox Almatbouli had the Nigerian in trouble in the first. Clearly buoyed by his early domination, Almatbouli moved further clear on points after showing good hand speed. Showboating in the third, the Jordanian was ducking and weaving before countering with some vicious punches to his rival’s body and head, as he claimed an impressive 19:7 win.

“I want to dedicate this victory to the people of Jordan and all my supporters”, declared Almatbouli afterwards.

Panamerican Games silver medallist Yamaguchi Falcao Florentino of Brazil, who fought for the WSB Mexico City Guerreros in their first season, showed his experience against India’s Sumit Sangwan as the southpaw got the better of his 19-year-old rival in the first two rounds. Sangwan, who looks an excellent prospect, continued to fight hard in the third but the savvy Brazilian prevailed 15:11.

26-year-old Fanlong Meng from China moved deceptively fast and constantly used his jab to keep Morocco’s Ahmed Barki at bay before scoring vital points with some carefully chosen shots. This tactic was paying dividends in round one and two with the Chinese southpaw opening up a six point lead coming into the third. The Moroccan 2009 African Champion just could not get inside his opponent and exited the competition after suffering a 17:8 defeat. Meng will now battle it out with Falcao Florentino for a place in the quarter-finals.

Tajikistan’s Jakhon Qurbonov, who qualified by coming second at the AIBA Asian Olympic Qualifying Event Astana 2012, faced 22-year-old 2011 Arab Games Champion Yahia Elmekachari of Tunisia. The rangy Tajik’s tactic of using the jab was quickly countered by the bright Elmekachari who threw some thunderous right hooks that landed flush on the jaw to assert his dominance and convincingly outpoint his rival in the first two rounds. That right hook connected once again several times and the Tunisian closed out the fight to win 16:8.

The final bout of the afternoon session was the one everyone was waiting for, the clash between two of the Light Heavyweight (81kg) top prospects, rising star Damien Hooper from Australia versus hard-hitting American Marcus Browne. Both these fighters were out to impress in the opening moments however as both realised they were evenly matched; they seemed to stand off each other. The US southpaw however managed to land a couple of good jabs to edge the first round.

With the crowd making a lot of noise, the boxers upped their levels and we really going for it, Hooper then raised the roof as two sensational straights connected hard to the face of Browne in the third. The American was rocked and Hooper sensed blood so threw several powerful shots that had Browne in real trouble as he took a standing eight count. It was an action packed final round in which the 20-year-old Australian came out on top 13:11 in spectacular fashion.

The evening session will have the rest of the Fly (52kg) and Light Heavyweights (81kg) taking to the canvas with a place in the second round of preliminaries awaiting the victors. —- AIBA