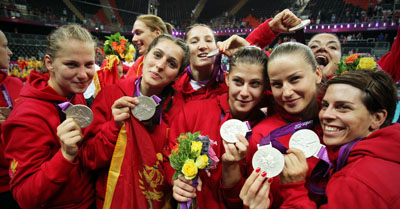 London – GBR, August 12, 2012: Heja, The Norwegian women’s handball team have defended their title at the London 2012 Olympic Games. But it took them a lot of energy to beat their surprising final opponents Montenegro 26-23 (13-10). The Olympic debutants were not disappointed with silver and celebrated their unexpected medal by dancing on the court while the Norwegian players ran their lap of honour waving the Norwegian flag in the Basketball Arena.

It was Norway’s second women’s handball gold after winning in 2008, and they join a long line of Scandinavian Olympic champions, with Denmark winning the women’s handball finals in 1996, 2000 and 2004.

When German IOC Member Claudia Bokel handed over the gold medals and IHF President Dr. Hassan Moustafa the flower for the gold medallists, the Norwegian joy was huge and the players were jumping on the podium. Norway are Olympic champions again after a thrilling final.

Despite the defeat, the Montenegrin team have made history, as their silver medal is the first-ever Olympic medal for their NOC since they split from Serbia-Montenegro in 2006. In their first participation at an Olympic Games in 2008, their best result was a fourth in men’s water polo. Their NOC can maybe add another medal to their tally on Sunday (12 August), when the men’s water polo team fight for bronze against Serbia.

The game was dominated by the top scorers Linn SULLAND (NOR) and Katarina BULATOVIC (MNE), who scored ten goals each. Between the posts, Montenegro goalkeeper Sonja BARJAKTAROVIC (MNE) gave a world-class performance.

BULATOVIC became overall top scorer of the women’s London 2012 handball competition with 53 goals ahead of her teammate Bojana POPOVIC (MNE), who scored 46 times and finished her international career with this final.

The first half was a private duel between SULLAND and BULATOVIC. This encounter ended with a draw after 30 minutes with seven goals (including four penalty goals each) for both shooters. Norway were in lead 13-10 at the break, though BARJAKTAROVIC had more saves than her counterpart Katrine LUNDE-HARALDSEN (NOR).

Following a strong start from the Olympic debutants, the defending champions turned the game around with a 4-0 series to make it 6-4 and further extended this margin to three goals at the half-time buzzer.

Despite several two-minute suspensions, including a red card against Marina KNEZEVIC (MNE) after her third suspension in the 38th minute, Montenegro were on the same level in the middle of the second half, as they avoided the Norwegian counter-attacks.

As BARJAKTAROVIC stood firm, her team equalised at 19-19 in the 47th minute after being down by four goals. Needless to say it was BULATOVIC with her tenth goal.

But BULATOVIC’s duelling partner SULLAND had still not enough, too. Two minutes before the end she hit the net for the ninth time, scoring to make it 24-22 and her tenth goal to make it 25-23 meant the final decision and gold again for the defending champions.

Coach Thorir HERGEIRSSON (NOR): “I am a very happy and proud man. My team have been magnificent in this game we have shown we are still a great team. We knew it would be even tougher to win a second successive Olympic gold medal than it was winning it the first time in Beijing. Our momentum grew during the competition. We had some good and bad performances early on but we always believed in our hearts that we could get to the final again if we performed the way we know we can. Montenegro were a very fine opponent. They deserved their place in the final and gave us a real fight to the end.”

Player Camilla HERREM (NOR): “It feels crazy. All the emotions just come forward. We have been living in a bubble for three weeks – you can’t think of anything else. Thorir is a good coach the way he runs the team. He showed the whole Norway people that he’s the best. He’s perfect for us, we need a coach like him.”

Player and world handball player of the year Heidi LOKE (NOR): “It is the best feeling ever. This was the one thing missing, the Olympic Gold and it is very special that I have it. This past three weeks have been a dream and the highlight of my handball career. As a team we started not so well, but we pulled together worked harder for every match. It was good to show that we were standing together as a team. We now have two weeks off so I will go on vacation. My son is five years old on Monday so I will go back home and celebrate with him.”

Player Jovanka RADICEVIC (MNE): “This silver for us glitters like gold and I think we deserved it and we showed out character. They deserved gold, they showed excellent resilience.”

Player Bojana POPOVIC (MNE): “I’m a little bit sad because we didn’t win the gold, but this is big for us to win the silver medal. We achieved everything that can be achieved, we showed we are a great nation and that our Montenegrins can be proud.”

Player Katarina BULATOVIC (MNE): “It wasn’t enough really. We are glad we took a medal but sad to finish the tournament with a loss. It is our first time at the Olympics so we should be happy. I am satisfied with silver. It is good for my career. I used to watch when I was younger and now I am the one on television. The reaction at home is going to be good. They will be really happy in the streets. It is something we will never forget. The people will be happy and proud. We will see when we get to Podgorica. Now we will watch our men’s water polo in the bronze final against and hope to see another medal.” —- IHF