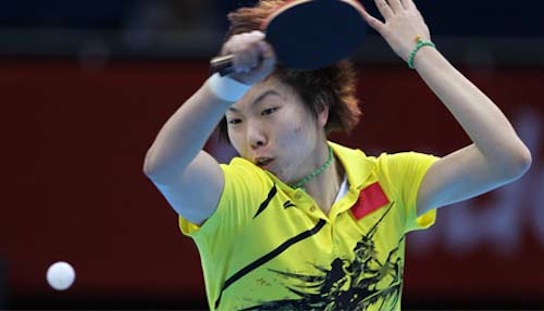 London – GBR, August 11, 2012: Named “Miss Number Two” by her supporters, as a result of being the runner up at the World Championships in both 2007 and 2011; China’s LI Xiaoxia, who won gold in both the Women’s Singles and Women’s Team events at the London Olympic Games, still cannot dispel the tag.

She is listed at no.2 on the Women’s World Rankings issued by the International Table Tennis Federation, following the conclusion of proceedings in England’s capital city on Wednesday 8th August 2012. Compatriot, DING Ning, the player she beat in the final, retains her no.1 spot.

However, it is progress for LI Xiaoxia. She changes places with colleague LIU Shiwen, who did not compete in London. LIU Shiwen is now at no.3. Progress for the London gold medallist and there is progress for others in the Women’s World Rankings, who gained podium finishes.

Similarly, there is progress for both WANG Yuegu and LI Jiawei, who completed the Singapore Women’s Team in London; WANG Yuegu climbs from no.11 to no.10, LI Jiawei from no.15 to no.13.

However, for Sayaka HIRANO who was the third member of the Japanese silver medal winning team it is a fall of five places; only competing in the team event in London, she falls from no.18 to no.23.

Meanwhile, on the Men’s World Rankings, the gold and silver medallists in London retain their status, China as on the female list, occupy the top four places.

ZHANG Jike remains at no.1 with WANG Hao, the man he beat in the London final, still at no.4. MA Long, who only played in the team event, retains his no.2 spot one place ahead of XU Xin, who did not compete in London.

The man to benefit from his Olympic exploits is Germany’s Dimitrij Ovtcharov; he breaks the top ten barrier for the first time in his career. Bronze medallist in both the Men’s Singles and Men’s Team event in London, he now appears at no.9; previously he was listed at no.12.

Otherwise it is status quo amongst the elite men. The 2008 Beijing Olympic Games gold medallist, MA Lin, an interested spectator in London, remains at no.6, one place behind Japan’s Jun MIZUTANI and one ahead of Germany’s Timo BOLL, the reigning European champion.

Timo BOLL, who was surprisingly beaten in round four of the Men’s Singles event in London by Romania’s Adrian CRISAN, returned to form in the Men’s Team competition. He beat ZHANG Jike and alongside Dimitrij OVTCHAROV and Bastian STEGER steered Germany to Men’s Team bronze.

Adrian CRISAN climbs from no.27 to no.22 but Bastian STEGER, only present in the Team event, falls two places to no.26. CHUANG Chih-Yuan of Chinese Taipei, the man beaten in the bronze medal Men’s Singles contest by Dimitrij OVTCHAROV remains at no.8. —- ITTF/ Photo: An Sung Ho