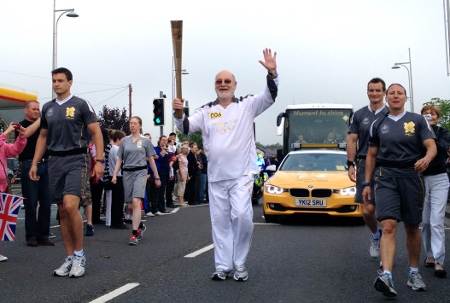 Atkinson, the former head coach of the British men’s team and an FIG honorary vice-president, carried the torch in the north Welsh town of Wrexham, 24 hours after Beth Tweddle had joined in the 70-day relay leading up to the start of the London Olympic Games.

Atkinson says he was “honoured” to have been selected by British Gymnastics to carry the torch, though it seemed only fitting given his contribution to the sport down the decades. A coach for 43 years, he was national coach at three Olympic Games and 12 World Championships and so is as qualified as anybody to judge the home squad’s prospects going into the London Games.

He is optimistic about the possibility of a British medal – something that has happened only four times previously in the history of Olympic gymnastics. “Going into the Olympic Games our teams are very well prepared,” he says. “Louis Smith was a bronze medallist in Beijing, Beth Tweddle is our greatest ever gymnast and Dan Purvis and Kristian Thomas and Daniel Keatings are in with a chance of medals.”

A medal for Britain would maintain the impressive upward trajectory of the country’s gymnastics, and Atkinson of all people does not need telling the distance already travelled. In 1972 when Olga Korbut sparked a wave of interest in the sport here, he estimates that there were “500 clubs in Britain at the time”. Today “the association has 200,000 members and that services 1,200 clubs plus 118 affiliated leisure centres.”

He reflects: “We have had huge progress in the development of dedicated facilities, a huge increase in the number of coaches and the level of coaches. We have seen the sport really develop. Our junior men and our youth men are ranked the best in the world.”

Atkinson, now in his 70s and awarded an MBE for his services to sport and coaching, retains his obvious passion for gymnastics and remains a regular figure at FIG academies around the world. His association with the world governing body goes back a long way – a one-time technical president, he served on the FIG executive for 12 years from 1996-2008.

Arguably his greatest achievement with the FIG was his leading role in the development of aerobic gymnastics, an undertaking he was given by the former FIG President, Yuri Titov.

“When I first got involved it was just a fitness [thing] and very poorly structured,” he remembers. “We developed coaches as well as judges. Now we have over 80 nations taking part. It is the most rapidly growing discipline of the FIG, it is highly technical now and a damn fine sport.

“It has been an interesting aspect of my life,” he adds, “but my heart will always be with artistic gymnastics.” It is no surprise then to hear that he will be glued to his television screen throughout the Olympics, and he reiterates his optimism about British prospects.

“They are not hopefuls, they have the exercises and they have the ability,” says Atkinson. Not least Tweddle. “Her exercise is remarkable.”

One of the British team members hoping that Atkinson’s words prove prophetic is Kristian Thomas. He has his own reasons to believe after playing a pivotal role in the British men’s team’s historic gold medal triumph at the European Championships. The 23-year-old scored 15.133 on the horizontal bar to clinch first place on the podium after Max Whitlock’s fall seemed to have spoiled their chances.

“The year has gone very well. We started off on a high note, qualifying for the Olympics and it has gone from there,” he says. “We’ve stamped our mark.”

Thomas also won on horizontal bar at January’s London Prepares Series test event and is looking forward to returning to the North Greenwich Arena in July.

“I won bar and got a medal on floor and boards as well. Hopefully it’ll be just as successful [for Britain] in the Olympics. It is a beautiful stadium, the crowd there get really behind you – it’s a great atmosphere, with everything that you could want for an Olympic Games in your own country.”

And could the home crowd witness a British medal? “A medal is on the cards, [though] I don’t know who it will come from,” he replies.

Of his own hopes, he adds: “The vault is probably my strongest chance to make the final – if that goes to plan then fingers crossed I will be in the final for that. But the main priority is the team – to just do whatever I have to and whatever the coach needs me to do for the team.”

Like John Atkinson, Thomas is another of the people put forward by British Gymnastics for the Olympic torch relay and his turn will come on 30 June in Smethwick, a 45-minute drive from the team’s training base in Lilleshall.

“It gives the different areas of the country a taste of what the Olympic experience is all about,” says Thomas and this certainly applies to another of the sport’s nominated torch bearers, 18-year-old Colette Hayes.

The teenager was British Gymnastics’ young volunteer of the year in 2011 and will carry the torch in her home city of Portsmouth on 15 July. Studying to become a PE teacher at University College of St Mark and St John in Plymouth, she is representative of the sport’s healthy grassroots in Britain.

Hayes is involved with five different clubs in Plymouth and Portsmouth, and is also a member of the National Gymnastics Advisory Panel. She says: “I have been involved in aerobics, team gymnastics, artistic gymnastics – I’ve been in all of it. There is so much variety and it is open to everyone.”

Like John Atkinson and Kristian Thomas, she has a passion for the sport that shines through. Those who hold gymnastics to their hearts in Britain will hope this passion is rewarded in London yet whatever happens, the future looks bright. As Atkinson puts it succinctly: “The inheritance is in place.” Image © British Gymnastics