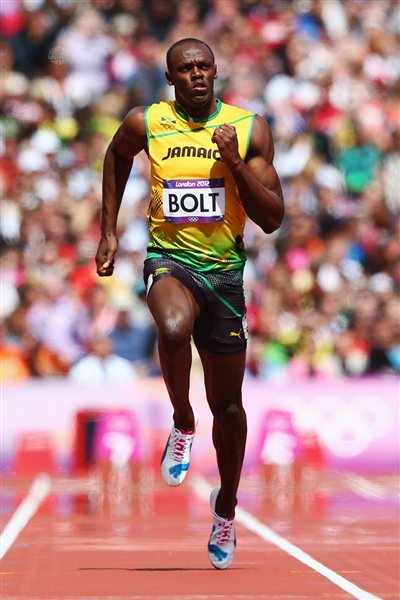 London – UK, August 04, 2012: every sport, That event will take place tomorrow evening (Sunday) and it is shaping up to be the greatest of all-time. The four fastest men in history all made it safely through the heats, and they will square off against one another first in the semi-finals, then again two hours later in the final.

The top three Americans – Tyson Gay, Ryan Bailey and Justin Gatlin – all won their 100m heats, and so too did the Jamaican trio of Usain Bolt, Yohan Blake and Asafa Powell. While Gatlin and Bailey both dipped under 10 seconds, the Jamaicans gave little away.

But expect to see more fireworks tomorrow as they battle it out for one of the eight lanes in the final, where Bolt will try to defend his title. Training partner Blake beat him at the Jamaican Championships, but can the sprinting superstar reclaim his aura of invincibility, or will he be made to look human?

At last year’s IAAF World Championships, Kenya took an historic sweep of the medals in the women’s marathon. Their team for the London Olympics is even stronger as they aim to repeat that feat, but Ethiopia could spoil the party.

Mary Keitany knows what it feels like to win in the British capital, having won the two most recent editions of the London Marathon. Earlier this year she took victory with an African record of 2:18:37 to establish herself as one of the Olympic favourites.

She is joined on the team by the top two from the World Championships – Edna Kiplagat and Priscah Jeptoo. But Ethiopia are fielding a trio of sub-2:20 women – Tiki Gelana, Aselefech Mergia and Mare Dibaba – and any of those are just as capable of winning.

The Marathon is the only event being held in the morning tomorrow, as the action will resume in the evening inside the Olympic Stadium.

Veterans Yamile Aldama, Tatyana Lebedeva and Trecia Smith – all global champions at one point in their career – will compete in the Triple Jump final tomorrow, where they will take on the top three from last year’s World Championships. Caterine Ibarguen, Olga Saladukha and Olga Rypakova took the top three spots in Daegu, but their task looks tougher in London.

The two reigning global champions in the men’s Hammer – World Champion Koji Murofushi and Olympic Champion Primoz Kozmus – produced their best form of the year in qualifying, but World silver medallist Krisztian Pars looked very strong. With some of the medal hopes crashing out in qualifying, the battle for medals looks set to be between these three.

Christine Ohuruogu, as is her trademark, has saved her best form for the major events and produced a season’s best of 50.22 to make it through to the 400m final. But despite an impressive charge down the home straight – another one of her trademarks – she was just the seventh-fastest qualifier for the final. 2009 World Champion Sanya Richards-Ross, world leader Antonina Krivoshapka and World Champion Amantle Montsho all looked very strong in the semi-finals.

Brimin Kipruto is another defending champion who will be in action tomorrow night and he hopes to lead a Kenyan sweep of the medals in the 3000m Steeplechase.

Team-mates Ezekiel Kemboi and Abel Mutai both made it through to the final, but they will be joined there by the silver medallist four years ago, Mahiedine Mekhissi-Benabbad, and US record-holder Evan Jager.

Elsewhere, the semi-finals for the men’s 1500m and 400m will take place – the latter sans defending Champion LaShawn Merritt – while the qualifying gets underway in the men’s high jump. —- iaaf.org