By Amelia Fisher-Starzynski, Paris, France, May 7, 2017: The Paris 2024 Olympic and Paralympic Bid Committee has offered its full congratulations to Emmanuel Macron, who was tonight elected President of France. 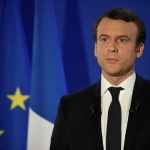 “On behalf of the entire Paris 2024 Bid Committee we would like to congratulate Emmanuel Macron on becoming the newly elected President of France. We know that our new President will be a great supporter of the Paris 2024 bid and play a key role in helping us secure the nation’s ambition to host the 2024 Olympic and Paralympic Games.

He understands the power of sport and how the Games can be a force for real change and help build inspiration and inclusion. The Paris 2024 team are looking forward to working with President Macron all the way to the IOC session in Lima, and beyond, to show the Olympic Family and the world why Paris would deliver the most incredible Games in 2024 full of passion and purpose.” —- Photo by Lionel Bonaventure/Pool/Reuters