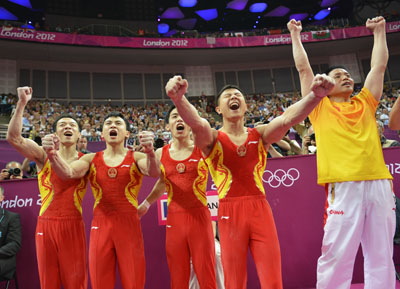 China, the 2008 Olympic Champions, had faltered in qualifying two days ago when they progressed in sixth place for the eight-team Final, but they came back at full strength tonight to successfully defend their title and become the first country since Japan (1960-1976) with consecutive Gold medals in the Men’s Team event.

The team assumed the lead after the second rotation and built upon it through their error-free routines on the last four apparatus. Team captain CHEN Yibing (CHN), whose powerful routine on Still Rings in the first rotation initiated China’s momentum, wept as the scoreboard flashed China’s winning team total score of 275.997 points.

Japan repeated their Beijing 2008 Silver medal, after the jury raised Kohei UCHIMURA’s (JPN) difficulty score on Pommel Horse following an inquiry by Japanese team officials. The score was raised by 0.700 points to 6.100 points, producing UCHIMURA’s final score of 14.166 points and lifting Japan from fourth place to second with a team score of 271.952 points.

A disheartened Ukrainian team watched from the sidelines as the scoreboard shifted their initial third-best total score of 271.526 below Japan and Great Britain, out of the medals.