Amelia Fisher-Starzynski, Paris, Mar 19, 2017: Paris 2024 has joined the French Swimming Federation (FFN), UNICEF France and thousands of people across the country to celebrate La Nuit de lEau (Night of Water), for improved access to swimming (Camille Lacourt) for all as a key legacy of its bid to host the 2024 Olympic and Paralympic Games.

Le Nuit de l’Eau is an annual charity and sports event in France that, since 2008, has increased awareness about the importance of water as a vital resource and raised money to support UNICEF’s safe access to drinking water programmes for children around the world. 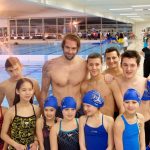 For one night each year, more than 200 swimming pools and clubs across the country open their doors and stage events that promote water safety, education and fun while encouraging people to donate to a good cause. Over the past nine years, more than 1.5 million euros have been generated from the event – this year’s edition will see money raised go to help children in Haiti affected by Hurricane Matthew.

Promoting the idea of better access to swimming and encouraging more young people to take up the sport is a key legacy goal for Paris 2024, and the development of a new Aquatics Centre in Seine-Saint-Denis, the area of Greater Paris where Paris 2024’s innovative and sustainable urban development project will be centred, is a core part of that plan. This is supported by the city’s overarching strategic plan for increased swimming, which has set aside 150 million euros for investment in modernising and creating new swimming pools in Paris by 2020, as well as Paris 2024 and Mayor Anne Hidalgo’s shared ambition to bring public swimming back to the River Seine by 2024.

“In Saint-Denis, we will build our much-needed Aquatics Centre, which will help address the current problem that one child out of every two in the area hasn’t learned to swim by the time they are 11-years-old. When it is handed over to the local community after the Games as part of our legacy promise, the Aquatics Centre will provide an accessible, state-of-the-art facility that teaches water safety to local children and encourages them to take up swimming.”

“Bringing the 2024 Games to Paris will prove hugely beneficial for swimming throughout France by raising the profile of our sport and encouraging even more people to take up swimming. The new Aquatics Centre will also play a very important role in the community of Saint-Denis providing all citizens with greater access to top class facilities.

“We are proud to be a founding partner of La Nuit de l’Eau, which not only raises awareness and donations for vital causes such as access to clean drinking water for communities around the world, but also promotes swimming here at home and encourages people to get involved with their local pool or club.”