It was 6 o’clock in the morning when an officer of Tokyo Metropolitan Government (TMG) asked us to please get ready to go to Miyagi stadium and buses are ready.

This officer is from the department of documents and public relations of general affairs division.

We were briefed about this visit at last night which was named as optional media tour and it was completely sponsored by TMG in which all foreign media representatives were given visit from Tokyo to Fukushima, Miyagi, Rifu, Onagawa, and some Schools.

And in which all travelling and boarding/lodging facilities were responsibilities of TMG and beside this all participants were issued a high speed internet portable devices from 7 to 9 September 2018.

“the affected people are really brave because they are still live in these area and still putting their efforts to reconstruct their village, town city etc. we salute them” (Brave People JAPAN)

Everyone was asked to gather at Tokyo big sight at 5pm so that the buses could leave on time.

All media persons had arrived on 6th floor of Tokyo big sight half an hour earlier where TMG representatives were present and were briefing about tour accordingly.

Anyways all media persons got in the bus in the form of two course A and B.

All the three buses left at exactly 5pm in the evening and in every bus tour operators and TMG representatives over there for the assistance of foreign media.

There were 24 foreign media representatives from 14 different countries of the world.

Where all rooms were already booked for guests by the TMG and just after entering everyone was given keys of their room and were directed to line up at 6am in the bus by tomorrow as per schedule.

The most fascinating quality of Japanese people is punctuality and they are also abiding by the rules.

All the three buses arrived at Miyagi stadium Rifu town at 7am in the morning. At 7:15am all media persons were warmly welcomed by the Mayor of Rifu Town Yutaka Kumagai. 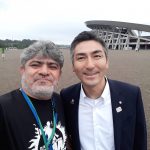 Moreover, the overview of the Miyagi stadium’s situation and destruction at the time of the Great East Japan Earthquake were briefed through slides by Fumitsugu Komatsu (Stadium Manager of Miyagi Amateur Sports Association).

Few minutes were given to conduct interviews and Photographs.

(The Largest Stadium in the Tohoku Region) 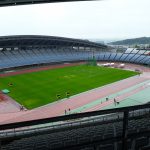 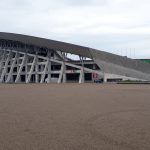 The respective Stadium is located in a lush green area of Rifu town. Miyagi Stadium has an all-weather 400-meter track with nine lanes.

Natural turf (western turf) is planted in the field and this stadium is available for large-scale matches such as those of football, rugby and American football.

When the Great East Japan Earthquake occurred, this stadium served as an emergency operation hub although the roof of the facility was damaged.

This stadium will host the Tokyo 2020 football games.

Miyagi Sports Park around the stadium calls “Grande 21” and includes athletic facilities below:

– a general gymnasium that is capable of hosting international indoor sports competitions;

In addition to them, there are also recreation facilities such as a park and an observatory adjacent to the stadium.

Completion of construction in 2000

The venue for briefing was the roof top of Miyagi stadium from where the viewpoint of stadium was fabulous and at that time the drizzling made the weather so pleasant.

As the briefing ended the photography and interview session started.

When we came at downstairs by elevator so we were so wondered to see that so many students were training for competitions on the athletics track.

Then the International Media were ready for the departure of the next station.

Miyagi and Fukushima, which were hit by the great earthquake and tsunami in 2011, have been recovering, especially with the power of sports (Brave People JAPAN). 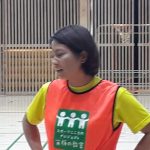 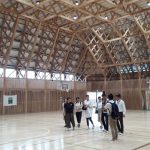 After the arrival at Miyanomori Elementary School, Higashimatsushima City Miyagi prefecture as we came out of the bus so everyone was given slippers because shoes weren’t allowed inside the school.

When we entered inside the Gymnasium of School so first an introduction was given about “Sports Smile Classroom” by Hiroyuki Katsumata (Manager of General Affairs of Education) and Ayumu Muraoka (Principal of School). 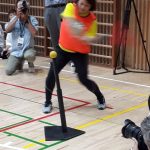 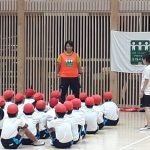 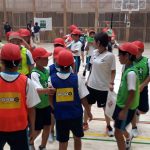 Then the dream teacher played several games with children which interested and were appreciated by the viewers.

Physical trainer of school also participated in the activity and the children of earthquake affected areas surprised the viewers by their excellent performance.

Purpose of this session was to spread happiness among the affected children. Because sport is power. 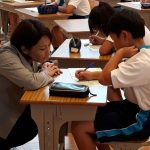 The activity which consisted on physical activities, games etc. continued for 35 minutes.

At the end of this session we were taken towards a classroom where about 40 students were present. Where dream Teacher shared her efforts in detail that how I got this gold medal and real efforts never waist and  it is our life time asset. 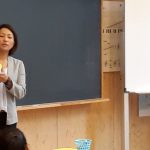 The students asked questions to the dream teacher after showing slides and then she also participated in different games with them. Moreover the Olympian also conducted test of all children and then the they made a group photo. Cont…… 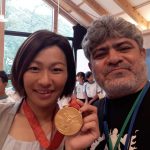