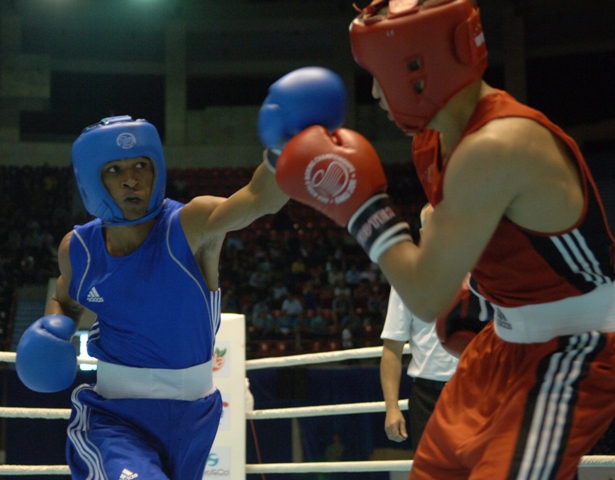 London, Great Britain, July 24, 2012 – With just a few days to go until the biggest show on Earth gets underway in the British capital, we look at the men and women in each of the weight categories. Throughout history, the Olympic Games has brought the best of the best of our sport to the wider public, showcasing boxing in all its glory. This year, with women’s boxing making its debut, the spectacle will be even more phenomenal. We will be here to give you continued and in-depth coverage of all things boxing in the build-up and when the competition begins on 28 July at the ExCeL London.

Since bursting onto the scene as a precocious talent at the 2003 AIBA World Boxing Championships in Bangkok where he took a sensational silver medal as a 22-year-old, Zou Shiming from the People’s Republic of China has come to dominate the Light Flyweight category for the best part of the last decade, becoming in the process a triple World Champion and taking gold at the Beijing 2008 Olympic Games on his home soil. Now 30, there is a long queue of talented fighters ready to challenge him. The big pretender to his throne is newly signed to the AIBA Professional Boxing (APB) program, 23-year-old South Korean Jonghun Shin, whom Shiming defeated in the AIBA World Boxing Championships Baku 2011 final, but is now a year older and wiser as he travels to London. Russian team

Captain David Ayrapetyan will also be one challenging for honours this summer; the 28-year-old has the know-how to go all the way. Puerto Rico’s Jantony Ortiz Marcano looked hungry for success at the AIBA American Olympic Qualifying Event in Rio in May. Patrick Barnes from Ireland could go deep into the competition whilst Italian rising star Manuel Fabrizio Cappai is maturing fast at this level. Last but not least, do not underestimate the class of Cuba’s Yosbany Veitia Soto.

There will be no defending champion so there will be the crowning of a brand new Olympic Champion in London. 23-year-old Russian Misha Aloian took gold in Baku and will be the man to beat in the British capital. The biggest threats to his crown will be the sublime and technically gifted Welshman Andrew Selby, who loves to continually switch stance, and the experience US veteran Raushee Warren, one of the stars of the World Series of Boxing. France’s Nordine Oubaali is another who on his day can defeat anyone so if he hits form during the Olympic Games, he could go all the way. Uzbek teenager Jasurbek Latipov’s development has really accelerated of late and he will definitely influence who is crowned champion. Irishman Michael Conlan has also big credentials at this level. One boxer in some form is Italy’s Vicenzo Picardi who, after taking a bronze medal in 2008 in Beijing, will now seek to go all the way to the final in London.

With 28 boxers battling it out in the category, there promises to be a few surprises along the way and without the defending Olympic Champion competing, it is an opportunity for someone to imprint his name in the pages of history. 21-year-old Cuban Lazaro Alvarez Estrada (photo) is the overwhelming favourite after his sensational run in Baku saw him take the gold medal, however this year the fledgling talented southpaw will not have the element of surprise. One man who will look to stop the agile Cuban is Great Britain’s Luke Campbell, a compact fighter with a stinging jab. Add Algeria’s combative Mohamed Ouadahi, classy Shiva Thapa of India and Irish record-breaker John Joe Nevin to the mix, there promises to be fireworks. Kazakhstan’s Kanat Abutalipov, who qualified by winning the WSB Individual Championships in 2011, and the impressive Tajik Anvar Yunusov have the armoury to do some serious damage in what will be another hotly contested category.

Tomorrow we will have a look at the men in the Light (60kg), Light Welter (64kg) and Welterweight (69kg) categories. —- AIBA