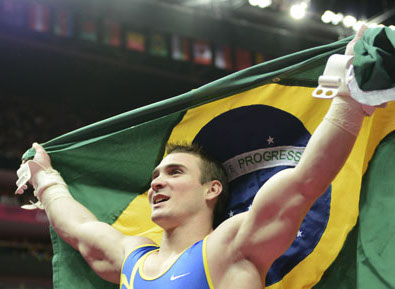 London – GBR, August 06, 2012: History was made in the North Greenwich Arena not just once but twice on Monday as thrilling performances from Arthur Nabarrete Zanetti and Yang Hak-Seon secured the first ever Gymnastic Gold medals for Brazil and Republic of Korea. Brazil’s Zanetti shocked reigning champion Chen Yibing of China with victory on Rings while Yang jumped to Gold in the Vault Final. In between Russia’s Aliya Mustafina underlined that her recovery from last year’s cruciate ligament injury was complete by taking Gold on Uneven Bars. 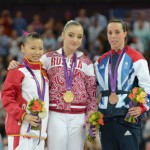 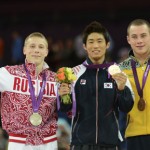 The day’s biggest surprise was the triumph of Zanetti who provided a dramatic denouement for a Rings Final in which Chen took Silver and Italy’s Matteo Morandi Bronze. Reigning champion Chen had punched the air in celebration after opening the final with a score of 15.800 but he found himself pipped at the last as Zanetti, eighth on the list, stepped up to score 15.900 – matching the Chinese for difficulty but beating him by 0.1 on execution.

Zanetti, fourth in qualifying, admitted he had shocked himself by bettering Chen. “I was surprised because Chen is a fantastic gymnast and the fact that I had a higher score is the result of many years of hard work,” he said. “I was the last gymnast to compete and I stayed calm and took my moment. It’s the very first Olympic medal for Brazil in Gymnastics so I’m really happy with this.”

Chen was equally surprised that Zanetti had outscored him, pointing to the fact that the Brazilian had taken a step backward on his dismount. “When the score came up I was a little disappointed because the landing of the Brazilian wasn’t great. But I have to congratulate him because he did very well.”

For Chen, the four-time World Champion, his performance here was “better” than when taking Gold in Beijing and it marked his farewell to the Olympic stage – he kissed the apparatus after completing his routine and confirmed he would be retiring afterwards. “I decided before the Games to end my career because of my physical condition,” said the 27-year-old.

The day’s other historic Gold came from Yang, the reigning World Champion, who like Zanetti was last on the apparatus in the Vault Final and snatched the Gold medal from Russia’s Denis Ablyazin.

Yang said afterwards that he had been struggling to sleep because of the pressure but when the time came to deliver, he did so in style. “I was able to show 100 per cent of my ability – I felt like a feather today,” said the South Korean.

The quality of the field meant he opted to perform his eponymous Yang technique – a triple twisting front somersault – on his first Vault. “The decision was made that if the scores [of the other gymnasts] went above or below 16.266 I was going to do it. I have to feel the twist and today I felt so light so I was able to land very well.”

Although he ran forward on the landing, he earned a score of 16.466 thanks to the 7.400 difficulty. His second Vault scored 16.600, producing an overall score of 16.533 to leave Ablyazin second on 16.399. “I knew the Korean gymnast would get the Gold, but I was still hoping. However, I didn’t get upset when I saw his score, I was prepared for Silver.”

The Bronze medal for Igor Radivilov was Ukraine’s first in Artistic Gymnastics in London and he described it as “good for me and good for Ukraine”.

The presence of local favourite Beth Tweddle ensured the Union Jacks were out in force for the Women’s Uneven Bars Final but she had to settle for Bronze behind Mustafina and Silver medallist He Kexin. The Russian delivered a routine packed with release elements and intricate pirouetting skills and earned a score of 16.133 points – with 9.133 for execution.

Mustafina reflected that she had thought Olympic Gold beyond her reach only six months ago owing to the ACL injury she suffered last year. “I did not believe I could do it,” said the 17-year-old, who had already won a Bronze medal in the Individual All-around. “Of course when I got the Bronze medal I became more confident.

For the deposed champion He Kexin, there was the consolation of a Silver medal after she scored 15.933 – including 7.100, the highest difficulty score. “I’ve put in a bigger effort than in 2008. I’ve been through a lot since then,” said the 20-year-old, who had struggled to recapture her best form and was the last gymnast to qualify for the China team.

“I was really thankful to coach Lu [Shanzhen] for taking me on. He has to put up with a lot of pressure for selecting me, I am glad I did well so he can be proud of me.”

There were plenty of proud British Gymnastics fans in the North Greenwich Arena after Tweddle won her Bronze. Her hopes of Gold disappeared with a step on her dismount but a score of 15.916 was enough to secure a place on the podium – and make amends for her fourth-place finish in Beijing.

“It just finishes my career perfectly,” said the 27-year-old. “I’ve got every other title to my name and this is just the one thing I was missing. I would have been devastated walking away with no medal but I can sleep easy tonight.”

Tweddle’s Bronze was the first individual medal for a British woman gymnast – another small piece of history on a day of firsts. —- FIG