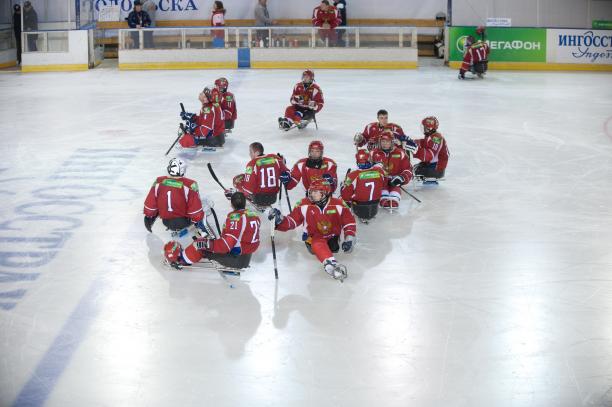 Novi Sad – Serbia, Nov 12: The 2012 IPC Ice Sledge Hockey B Pool World Championships will get underway on Tuesday (13 November) in Novi Sad, Serbia, where six teams will compete to move up to the A Pool for next season to become one step closer to qualifying for the Sochi 2014 Paralympic Winter Games.

Austria, Germany, the Netherlands, Poland, Russia and Sweden will all take part, with the top two finishers earning the right to play in April’s 2013 A Pool World Championships in Goyang City, Korea.

The Championships will be held at Novi Sad’s Sports and Business Centre Vojvodina and will run through Saturday. Two round-robin games will make up each of the first three days of competition, followed by two days of playoff action.

Russia will automatically qualify for Sochi 2014 as the host nation, and many teams are deeming them the squad to beat in Novi Sad.

“This season, our team has set itself the task of winning the world championship in B Pool in Serbia and to compete with the world’s strongest teams in the A Pool next spring in Korea.”

Austria brings in another storyline, as the programme will make its first major appearance on the international stage, and the squad has NHL player Thomas Vanek to thank.

Vanek, whose father Zdenek is the Austrian ice sledge hockey team’s coach, worked with the NHL Players’ Association to donate 15 sledges and 20 equipment packages to help the programme start up nearly two years ago.

“It’s been a slow process, but it’s been going good,” Vanek said. “When we started it, there were three to four guys, now there’s about 15 or 16. The sport is growing which is good, but obviously we’ve got a long way to go. It’s hard to find sponsors, to find money.

Sylvester Flis, Most Valuable Player of USA’s gold-medal winning ice sledge hockey team at the Salt Lake City 2002 Games, is now a part of Poland’s programme, for which he will serve as both the captain and coach at the Championships.

Sweden and Germany are the only two teams in the field to have participated in a Paralympic Games, though the Netherlands will be an up-and-coming team to watch in the future.

The Opening Ceremony of the Championships will begin at 13:30 at Novi Sad’s Hotel Park on Tuesday, and the first game between Germany and the Netherlands will start at 17:00.

This will be the third edition of the B Pool World Championships, with the most recent event taking place with five teams in Eindhoven, the Netherlands in 2009, when Estonia defeated Sweden in the gold-medal game for the title. For a complete schedule and results from the Championships, as well as athlete interviews and videos, please check out www.icesledgehockeyworlds.org —- IPC