Hong Kong, July 14, 2018: Pakistan’s younger Judoka Qaisar Khan performed well until semi-final but unfortunately he did not maintain his victory and lost in Semi-final form world ranking no 8, Hungarian Judoka by half point in Golden Score.

Qaiser got Repechage, in which he fought for Bronze Medal and clinch it. 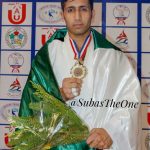 In his first fight he was against Malaysian Judoka TAN, Tze Ning, Qaisar beat him with ippon (full point)

Qaisar qualified into Semi-final, defeated him by ippon too.

In semi-final Qaisar was against World’s No 8, Hungarian Judoka, VEG, Zsombor.

Qaisar gave him tough time a got golden score but unfortunately he lost by half point from his most experienced rival.

Qaisar in his fight for Bronze medal was against Iranian Judoka, SHOJAEI Bakhtiyari, Abolfazl, world ranker no 18.

Qaisar khan defeated him by ippon and got Bronze Medal.

Qaisar Khan is world ranker no 25 has got Bronze medal in Asian Cup Cadet, Hong Kong.

The Secretary General of Pakistan Judo Federation Mansoor Ahmad said that the medal will not only improve his world ranking but also enhance the chances to qualify into Youth Olympics 2018.

Qaiser will leave Hong Kong tomorrow for Macau, where he will get training from 16th to 19th July 2018 and then he will participate in Asian Cup Cadet from 19th to 22nd July 2018.

The President of Pakistan Judo Federation Colonel Junaid Alam said that the performance of Qaiser khan is well.

He will show his worth in Macau too; as a result he will make his place into Youth Olympics 2018.